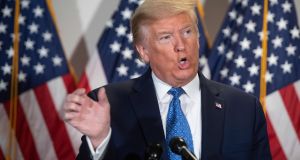 US president Donald Trump said he would postpone a G7 summit he had hoped to hold next month until September or later and expand the list of invitees to include Australia, Russia, South Korea and India. Photograph: Saul Loeb / AFP via Getty Images

Donald Trump has postponed the G7 summit until after the summer and pledged to invite Russia and several other nations to expand the membership beyond what he called a “very outdated” arrangement.

The US president had hoped to host the leaders of the G7 nations – Germany, France, Canada, Japan, Italy and the UK – at the White House next month. But he postponed the annual forum after German chancellor Angela Merkel declined to attend the event in person.

Speaking to reporters aboard Air Force One as he returned from the launch of the SpaceX rocket in Florida, Mr Trump said the G7 forum was not representative of what was “going on in the world” today.

“It’s a very outdated group of countries,” he said on Saturday.

Mr Trump said that he wanted to invite the leaders of Russia, India, Australia and South Korea to the event, which he suggested could be held in September, or possibly after November’s presidential election.

“Maybe I’ll do it after the election. I think a good time would be before the election,” Mr Trump said about the event, which he called both the G10 and the G11 during the conversation with reporters on his plane.

The move to invite Mr Putin will prove controversial as Russia was expelled from the then G8 in 2014 because of its annexation of Crimea.

Thomas Wright, a foreign policy expert at the Brookings Institution, said the G7 members would not agree to a formal enlargement, but there was precedent to invite other leaders on a one-off basis.

Mr Trump had hoped to use the G7 to build a coalition to put pressure on China, particularly over its recent decision to impose national security laws on Hong Kong.

Mr Trump on Friday unveiled actions against China – including the threat of sanctioning Hong Kong and Chinese officials – over the move, which will be implemented by bypassing the local legislature.

Mr Wright said Mr Trump had “single-handedly destroyed” his plan to put pressure on China with the unilateral measures that he announced.

“Now he has postponed the summit and invited Putin who is a staunch ally of Beijing on Hong Kong,” he said. “The whole episode is a disaster for US diplomacy and a windfall for [Chinese president] Xi Jinping.”

Mr Trump originally planned to host the G7 summit at one of his golf resorts in Florida, but reversed course after facing criticism. He then suggested Camp David, the presidential retreat, before floating the idea of holding a virtual summit owing to the coronavirus pandemic.

More recently, however, he suggested inviting leaders to the White House, in an effort to show that the US was reopening its economy following the devastating outbreak.

Alyssa Farah, the White House communications director, said the idea of the expanded summit was to bring together traditional US allies to discuss ways to deal with China.

Mr Trump has faced a rocky time at summits. At the G7 in Canada in 2018, he called his officials from Air Force One on the way home to tell them not to sign the communique as he was unhappy at something that prime minister Justin Trudeau had said at a press conference.

At the Quebec gathering, Mr Trump threw sweets on the table in front of Dr Merkel, telling her not to say he never gave her anything. At the Nato summit in Brussels the same year, he stunned other leaders by criticising Dr Merkel in front of the group.

In December, Mr Trump called Mr Trudeau “two-faced” after a video surfaced showing the Canadian leader along with UK prime minister Boris Johnson and French president Emmanuel Macron – seemingly mocking him behind his back at Buckingham Palace. – Copyright The Financial Times Limited 2020