George Floyd death: Clashes and curfews in many cities as protests sweep US

George Floyd's death at the hands of a white police officer in Minneapolis has sparked unrest and riots in dozens of cities across the United States for the fifth day in a row. Video: NBC/Twitter/Reuters 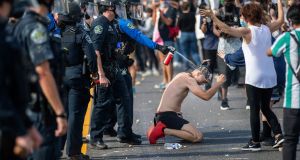 An Austin Police Department officer sprays pepper spray at a protester in Austin, Texas, as demonstrations took place around the country. Photograph: AP

The United States was rocked by protests across the country on Saturday night, as public anger about the death of an unarmed African-American man, George Floyd, in police custody on Monday night spilled on to the streets.

Demonstrations took place in some of the largest cities in the country, with many descending into violence as local authorities struggled to keep control, despite deploying the National Guard and imposing curfews.

In Atlanta, where the mayor declared a curfew from 9pm until sunrise on Sunday morning, hundreds of protestors clashed with police near CNN headquarters in the centre of the city as demonstrations erupted for the second night.

Protestors threw water bottles at police officers who were lined up holding their riot shields as they engaged in a tense stand off with the demonstrators.

Groups of people chanted “George Floyd” and “Hands up Don’t Shoot,” as dozens of members of the National Guard blocked the entry to Centennial Olympic Park nearby. At 9pm the police launched tear gas and moved forward, dispersing the crowd as helicopters and drones flew overhead. Several arrests were made.

Many of those protesting had decided to travel to the downtown area on Saturday after seeing the scenes of violence that unfolded in the city on Friday night when a police car was burned and CNN headquarters came under attack.

“The system is wrong, so wrong,” Jessica, a young African-American woman who has lived in Atlanta all her life, told the Irish Times.

She said the death of George Floyd after he was held down by a white police officer in Minneapolis was “pure racism.” “Especially because he was not resisting arrest – you don’t have to use that force. There were no morals, no sense that this was wrong. This kind of treatment has been going on a long time.”

Others said they believed the imposition of a curfew by the mayor was provocative. “It’s an infringement of rights,” said Spencer, a white Atlanta resident who lives in the suburbs but travelled into the city to protest. “So many of my African-American friends have had this kind of experience with the police,” said her friend Mia, aged 21.

In Minneapolis, the city where Mr Floyd died on Monday after a white policeman pressed his knee on his neck for several minutes, state police and the National Guard fired tear gas and clashed with protestors.

Police fired rubber bullets at the demonstrators who had gathered near the scene of Mr Floyd’s death.

Marches in New York throughout the day turned violent into the evening.

A police van was set ablaze in Union Square in the heart of Manhattan while protestors hurled bottles at police in Brooklyn prompting law enforcement officers to respond with pepper spray.

Earlier in the day, US president Donald Trump blamed “radical, far-left groups” for the violence, stating that many of the protestors had travelled from other states to partake in the protests.

“I understand the pain that people are feeling,” he said in Florida where he witnessed the launch of the Space X rocket. “We support the right of peaceful protesters, and we hear their pleas. But what we are now seeing on the streets of our cities has nothing to do with justice or with peace. The memory of George Floyd is being dishonoured by rioters, looters and anarchists.”

But as Minneapolis was engulfed in violence later on Saturday night, Mr Trump hit out at the city’s mayor, Jacob Frey, on twitter.

Earlier in the day, Mr Trump told reporters that he was switching next month’s G7 summit to September and would invite other countries including Australia, South Korea, India and Russia, which was banned from the G8 after its annexation of Ukraine. Mr Trump’ s move came after German chancellor Angela Merkel rebuffed his invitation to host the summit in person in June in Washington, because of the ongoing threat from coronavirus.

Mr Floyd’s death on Monday night in Minneapolis has prompted widespread outrage at the institutional racism that many believe is endemic in the US criminal justice system. It prompted comparisons to the death of Eric Garner who died after being held in a chokehold by a New York police officer in 2014 .

Derek Chauvin, the 44-year-old former police officer who held his knee on Mr Floyd’s neck as he pleaded for his life and said “I can’t breathe,” was charged with third-degree murder and manslaughter on Friday. The three other officers who were at the scene have not been charged.

1 US passengers fly into Dublin: ‘I’m here for six days. I guess I’ll have to stay inside’
2 Maureen Dowd: Biden has his limitations but he’s no Trump
3 Covid-19: 200 to 250 people arriving in Ireland from US daily - Coveney
4 People with foreign accents should not be ‘assumed’ tourists - NPHET
5 ‘I thought it was a hoax’: Patient dies after Texas Covid party
Real news has value SUBSCRIBE