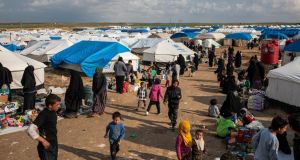 Thousands of men, women and children charged with terrorism are being detained in overcrowded and degraded conditions amounting to ill-treatment in Iraq’s northern Ninevah province, Human Rights Watch (HRW) has said.

The NGO calls on Baghdad to ensure humane treatment and “that there is a clear legal basis for detentions”. Detainees should be released if this does not apply and the government cannot improve detention centre conditions.

Lama Fakih, HRW acting regional director, said: “The Iraqi government urgently needs to rebuild and rehabilitate its detention facilities. Iraq has a duty to ensure that detainees are housed decently, in line with international standards.”

United Nations standards for prison conditions, called the Mandela rules, require that prisoners’ health must be safeguarded by the provision of space, heating, ventilation and sanitary installations.

Three pretrial facilities in Ninevah have a combined maximum capacity of 2,500 people but in late June they were holding 4,500 prisoners and detainees, including 1,300 who had been tried and convicted and should have been shifted to Baghdad, HRW reports.

An expert who visited one of Ninevah’s prisons said detainees had no space in which to lie down in their cells or even sit comfortably. Lawyers could not confer with clients because there was no space to meet. “The authorities should ensure that the conditions in Iraq’s prisons do not foster more grievances in the future,” Fakih said.

Following the 2003 US occupation and installation of a Shia fundamentalist-dominated government, Iraq’s Sunni minority was subjected to discrimination, abuse, imprisonment and murder. Thousands joined al-Qaeda-affiliated radical Sunni groups and seized Sunni towns and cities, including Mosul, with the aim of creating a “caliphate”, which they succeeded in doing in 2014 under the black banner of Islamic State (also known as Isis).

After a three-year campaign, Iraq toppled Islamic State and captured thousands of fighters and collaborators and their wives and children.

In spite of the dire situation of Iraqi detainees, Baghdad has received and tried foreign Islamic State fighters – including dozens of Europeans – transferred from Syria by the US-backed, Kurdish-dominated Syrian Democratic Forces (SDF). Five French citizens were sentenced to death in May.

Meanwhile, conditions for 100,000 people in SDF detention camps in northern Syria are “apocalyptic”, the International Committee of the Red Cross (ICRC) has warned, urging countries to repatriate 11,000 members of foreign fighters’ families.

ICRC regional operations chief Fabrizio Carbone said its position was “to say [to foreign countries] take your nationals back” and warned that delay could mean the price they pay “is going to be higher” than if they acted today.