When President Trump announced that the United States would not recertify Iran’s compliance with the nuclear deal, Iran’s news media reacted. Video: The New York Times 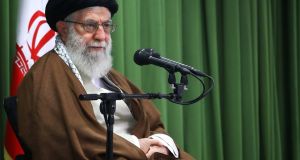 Iran’s supreme leader has described Donald Trump as “mentally retarded” as he urged Europe to do more to back the 2015 nuclear deal, following the US president’s refusal to recertify the pact.

European companies have rushed into Iranian markets since the landmark accord, and Ayatollah Ali Khamenei’s comments show he hopes to leverage them into protecting the nuclear deal.

While offering harsh criticism of Mr Trump, Ayatollah Khamenei wants to ensure Tehran continues to have access to the international market for its crude oil as part of efforts to revive a stagnant economy.

“The European governments have underlined the nuclear deal’s issue and condemned the US president’s remarks,” Ayatollah Khamenei said, according to comments posted on his official website.

“We welcome this approach but it is not enough that they only tell him not to tear up the deal. The nuclear deal is to their benefit.”

He said: “I will not spend time to respond to the nonsensical comments by the foul-mouthed president,” and referred to Mr Trump and his administration as “mentally retarded”.

He also warned that if the US tears up the deal, “we will shred it into pieces”.

Britain, China, France, Germany, Russia and the European Union – the other parties to the nuclear accord – have been telling Mr Trump’s administration to stay in the deal.

His refusal last week to recertify has sparked a new war of words between the Islamic Republic and the US, fuelling growing mistrust and a sense of nationalism among Iranians.

He said he decertified the accord on the grounds that Iran had committed several violations of the deal, but did not announce a withdrawal from the pact, instead shifting it to Congress for a decision.

1 The Sack of Balbriggan: The burning of a town that shocked the world 100 years ago
2 The FinCEN files: The billion dollar a month money trail
3 Brexit: Irish hauliers seek State help to bypass UK ‘land bridge’
4 Coronavirus: 396 more cases as public is urged to help protect ‘older and vulnerable’
5 Police in Australia search for Kildare man previously jailed for killing student
Real news has value SUBSCRIBE