Chinese capital pulls out stops for ‘serious atmosphere’ at congress 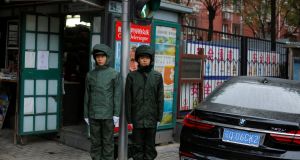 Paramilitary police officers keep watch in the old part of Beijing as the capital prepares for the 19th National Congress of the Communist Party of China. Photograph: Thomas Peter/Reuters

Wearing black fatigues, body armour, a helmet, and idly dangling a truncheon at his side, the pensioner peers at me closely as I park my bicycle on Jianguomenwai Dajie. The wide street leads to Chang’an Avenue and then on to Tiananmen Square at the heart of Beijing, where China’s ruling elite will meet this week for a twice-a-decade meeting. He’s taking no chances.

His red armband reads “volunteer”, and during major public events, such as the annual parliament or anniversary bashes, this busy thoroughfare is generally full of pensioners on steward duty, but the body armour is a new addition.

This is a bigger party congress than usual, as it is expected president Xi Jinping will receive a second five-year term as general secretary of the Communist Party during the week, entrenching his position as China’s most powerful leader since Mao Zedong. The party is leaving nothing to chance either and everything is about creating an atmosphere of “seriousness”.

“We get paid for this, a small amount. All the gear is from the government, we have to give it back after we finish the job,” says one of the superannuated security guards.

The Beijing Daily ran a stirring message from the city’s Communist Party chief Cai Qi, a close ally of Xi, who said all departments must strengthen co-ordination during the congress “at the highest level, with the strongest organisation and the most effective measures.”

The east side of the Workers’ Stadium is home to a row of giant night clubs, where the children of the rich and powerful, known as the fuerdai, like to cruise around in Porsche SUVs and Lamborghinis. Last Saturday, however, the street was closed off and police carried out random checks. Privilege was no protection.

All over the country, high-profile dissidents have been rounded up or forced to leave their homes for the duration of the congress, and brought to state-run detention facilities where they cannot interrupt the event. Radio Free Asia reported that activists are being sent on “forced vacation” during the congress.

Ensuring blue skies for the proceeding is a priority. Mid-October is normally one of the most pleasant times in Beijing, sunny but not too hot, with clear skies because northern China has not yet started cranking up coal consumption for winter.

Again, the government is taking no chances and, as with previous big events, factories are being closed and there appears to be sporadic cloud seeding to ensure rainfall and keep the skies clear, to what Cai calls “fight to win the war of maintaining blue sky”.

Public employees have been issued strict orders about how to behave during the congress. They have been warned that there will be checks of “political background” and no one is exempt from following the rules.

Even the menu is austere – no prawns or expensive dishes like sea cucumber, and the fruit baskets in their hotel rooms have been axed

As to the delegates themselves, this congress promises to be a much more austere affair than before, given that cracking down on corruption has been a centrepiece of Xi’s rule. The anti-corruption campaign has punished about 1.34 million “flies” since it began, as well some high-profile “tigers” in the upper echelons of the Communist Party.

These have included Xi’s political enemies as well as organisations such as the People’s Liberation Army.

What this means for attendees at the congress is no big bouquets of flowers, or expensive baijiu liquor in their hotel rooms. Previously available perks like free haircuts are barred. Even the menu is austere – no prawns or expensive dishes like sea cucumber, and the fruit baskets in their hotel rooms have been axed. They are going to drink a lot of tea in the next week and a half.

Foreign journalists and businesspeople have had their visas checked. Historical costume dramas, which make up a huge chunk of Chinese TV, and teen romance shows, have been put on pause until after the congress, to make sure the “serious tone” is respected.

Security is also affecting cities outside the capital. Passengers travelling to Beijing are being rigorously checked, and Shanghai has introduced a facial recognition security system for train travellers going to Beijing.

An exhibition in the run-up to the congress showed receipts for restaurant bills Xi had paid during visits to rural areas – all frugal repasts that feed into his man of the people image.

Cleaners are putting in overtime to get Tiananmen Square looking spick and span – the requirement is that a white shirt must be clean after it has been rubbed on the ground.