US president Donald Trump announces that the US will not certify that Iran is complying with the 2015 nuclear deal. Video: The White House 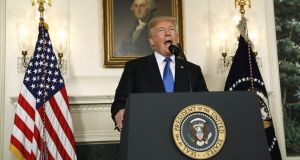 US president Donald Trump speaks about Iran and the nuclear deal in the Diplomatic Room of the White House in Washington, US. Photograph: Kevin Lamarque/Reuters

US president Donald Trump has angrily accused Iran of violating the spirit of the landmark 2015 nuclear deal but stopped short of ripping up the agreement.

In a speech at the White House, the US president announced a new strategy, saying the administration would seek to counter the regime’s destabilising activities and would impose additional sanctions to block its financing of terrorism.

But Mr Trump said he was not yet ready to implement a campaign pledge to pull the US out of the deal or reimpose nuclear sanctions.

Instead, he moved the issue to congress and the other parties to the seven-nation accord, telling legislators to toughen the law that governs US participation and to fix a series of deficiencies in the agreement. Those include the expiration of several key restrictions under “sunset provisions” that start in 2025, he said.

Mr Trump warned that without the fixes, he was minded to pull the US out of the deal and snap previously lifted sanctions back into place.

Without improvements, he said, “the agreement will be terminated”.

“It is under continuous review and our participation can be cancelled by me as president at any time,” he said.

Mr Trump twice previously certified that Tehran was complying with the agreement aimed at preventing the Middle Eastern state from developing a nuclear weapon.

However on Friday he said: “Based on the factual record I have put forward, I am announcing today that we cannot and will not make this certification.”

Mr Trump will also give the US Treasury Department broad authority to impose economic sanctions against people in the Islamic Revolutionary Guards Corps or entities owned by it in response to what Washington calls its efforts to destabilise and undermine Iran’s opponents in the Middle East.

He said Iran was under the control of a “fanatical regime” and that he would give the US Treasury Department broad authority to impose economic sanctions against the Islamic Revolutionary Guards Corps or entities owned by it.

Earlier, Iran vowed to retaliate against any action targeting its armed forces and accused the US of also going against the spirit of the deal.

“Iran will strongly respond to any action against its military forces, including the Revolutionary Guards Corps,” foreign ministry spokesman Bahram Qasemi was quoted as saying by state TV.

He added that Iran would continue to expand its defensive power, including its ballistic missile programme.

House Speaker Paul Ryan backed Mr Trump’s decision to re-examine the seven-nation accord which he claimed was “fatally flawed”.

The Wisconsin Republican said weaknesses in the nuclear agreement would allow Iran “to pursue nuclear weapons under the guise of international legitimacy” once specific restrictions on Iran’s nuclear programme expire after predetermined periods of time.

He warned simply enforcing a bad agreement was not sufficient.