Canadian prime minister Justin Trudeau will remain in power, but with a minority government that will require the support of a smaller left-leaning party after a hard-fought election. Video: Reuters 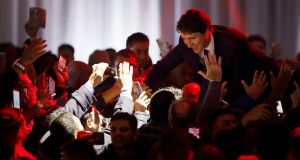 Liberal Leader and Canadian prime minister Justin Trudeau celebrates with supporters as he leaves the stage after the victory speech at his election night headquarters on October 21st, 2019 in Montreal, Canada. Trudeau remains in power with a Minority Government. Photograph: Cole Burston/Getty Images

Canadian prime minister Justin Trudeau hung on to power after a tight election on Monday that saw his government reduced to a minority, but aides predicted he would be able to govern for two years without many problems.

Mr Trudeau, one of the world’s most prominent progressive politicians, struggled to overcome the effects of two domestic scandals. His Liberals were leading or elected in 157 seats, a decrease of 20, preliminary results showed.

He now looks set to govern with the left-leaning New Democrats, who have 24 seats. Together the two parties can muster a majority 180 seats in the 338-seat House of Commons.

Minority governments in Canada rarely last more than 2½ years. Although the New Democrats lost 16 seats, leader Jagmeet Singh is now in a good position to press for action on priorities such as more social spending and increased action on climate change.

One senior Liberal also noted that many legislators needed to serve for another two years to meet the six-year requirement for a parliamentary pension. “That gives us a pretty free hand for that period,” said the Liberal, who requested anonymity given the sensitivity of the matter.

The New Democrats struck deals to help keep Liberal minority governments in power from 1972-1974 and in 2005.

Mr Trudeau visited Montreal’s subway, posing for selfies with commuters early on Tuesday, an echo of 2015 when he did the same thing.

This win was different. But Mr Trudeau barely mentioned the loss of his majority when he spoke to supporters early on Tuesday, saying he had “a clear mandate” for a progressive agenda and more action to combat global warming.

This is unlikely to please the western provinces of Alberta and Saskatchewan, which cast out every Liberal legislator amid anger over what the energy industry sees as overly stringent environmental rules.

Mr Trudeau’s liberal image took a blow early in the campaign when photographs emerged of him wearing blackface in the early 1990s and in 2001.

He had already been wrestling with the fallout from accusations he pressured former justice minister Jody Wilson-Raybould to help shield engineering firm SNC-Lavalin Group Inc from corruption charges. In August, a top watchdog said he had breached ethics rules.

Ms Wilson-Raybould, now an independent member of parliament, retained her seat on Monday, a feat in a country where nearly all legislators are backed by major parties. Former minister Jane Philpott, who also quit cabinet over the affair and ran as an independent, lost her Ontario seat.

The election was also a disappointment for Andrew Scheer, leader of the opposition Conservatives, who had sought a majority. Although the Conservatives won the popular vote, with nearly all votes counted on Tuesday morning they were leading or elected in 121 ridings, up only 24 seats.

Mr Scheer said he would continue to lead the party, but the result looks set to reopen questions about his future. Even before the election, some in the party were speculating about a leadership challenge if he lost. – Reuters