Clashes have broken out as thousands of people poured into the streets of Barcelona to show their anger after Spain's Supreme Court jailed nine Catalan separatist leaders to between nine and 13 years each. Video: Reuters 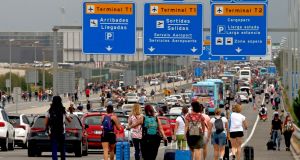 Travellers arrive on foot to Barcelona-El Prat international airport during the rally called by the group called ‘Tsunami Democratic’ (Democratic Tsunami) for ‘shutting-down’ the airport against the sentence ruled by Supreme Court on ‘proces’ trial’, in Barcelon. Photograph Quique Garcia/EPA

The former Catalan vice-president jailed for his role in the region’s failed push for independence two years ago has claimed that a new referendum on breaking away from Spain is unavoidable.

Oriol Junqueras and eight other separatist leaders were jailed for sedition by Spain’s supreme court on Monday. The ruling prompted furious protests across Catalonia and led to angry clashes with police after demonstrators attempted to occupy Barcelona-El Prat airport.

In an emailed interview with Reuters, Mr Junqueras, who was sentenced to 13 years, said he was convinced a political solution had to be found to end the bitter independence conflict.

“What I’m sure of is that this conflict is to be resolved via ballot boxes ... we are convinced that sooner or later a referendum is inevitable because otherwise, how can we give a voice to the citizens?” he wrote from prison, adding that he did not regret having organised the referendum in October 2017.

Mr Junqueras confirmed that he and the other jailed leaders would take their case to the European court of human rights in Strasbourg.

He said they would never abandon their push for independence. “Prison and exile have made us stronger and makes us ever more convinced, if that is possible, in our profoundly democratic beliefs.”

The nine separatist leaders were convicted of a range of offences, including sedition, misuse of public funds and disobedience, but cleared of the most serious charge of violent rebellion.

The four-month trial heard from 422 witnesses and investigated the events that triggered the country’s worst political crisis since it returned to democracy after the death of General Franco.

Hours after the verdicts were announced, an international arrest warrant was reissued for the former Catalan president Carles Puigdemont, who spearheaded the push for independence. The warrant said Mr Puigdemont, who fled to Belgium to avoid arrest by the Spanish authorities, was wanted for alleged sedition and misuse of public funds.

The verdict and sentences triggered angry protests, with demonstrations held around the region and skirmishes with police at El Prat. Officers used baton charges and foam bullets to try to move protesters.

Some trains were also halted after protesters put burning tyres and wood on railway lines and blocked roads and the airport entrance. Around 110 flights were cancelled.

Authorities in Catalonia said on Tuesday that three people were arrested and more than 170 injured, including about 40 police officers, during the clashes at the airport and elsewhere in the region.– Guardian News and Media