Three deaths, two disappearances on Canadian highway may be linked 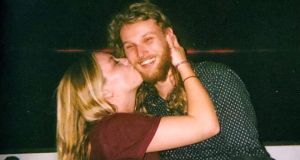 Lucas Fowler (right) and his girlfriend Chynna Deese were found dead on the side of the Alaska Highway, near Liard Hot Springs, in northern British Columbia, Canada on July 15th. Photograph: NSW Police handout/Australia and New Zealand/EPA

Police in Canada are investigating three suspicious deaths and the disappearance of two teenagers which took place within days of each other along a remote Canadian highway.

At a press conference on Monday, representatives of the Royal Canadian Mounted Police (RCMP) said the two cases might be linked, despite earlier assurances that there was “nothing to indicate” that the double murder of Australian Lucas Fowler (23) and US citizen Chynna Deese (24) was related to the discovery of a burning car and a man’s body some 500km south, and the disappearance of two Canadian teenagers.

A bearded man seen talking to Fowler on the side of the highway last week has emerged as the key to solving the mysteries.

Police released a composite sketch of the man whom police described “as Caucasian with darker skin and dark hair”. He was driving an older model of Jeep Grand Cherokee with a black stripe on the hood.

Fowler and Deese were nearing the end of a two-week road trip to Alaska when their van broke down along the Alaska Highway about 20km south of Liard River Hot Springs provincial park, a popular tourist spot. Several locals stopped and asked if they needed help, but the pair appeared to have the situation under control.

Their bodies were discovered by the roadside on July 15th, but it took three days for police to identify them. The RCMP believe they were killed sometime between July 14th and 15th.

On Friday, four days after the bodies of Deese and Fowler were discovered, police in the town of Dease Lake – several hours’ drive south – launched a search for Kam McLeod (19) and Bryer Schmegelsky (18) after their truck was discovered in flames near the town. The two youths had been travelling to Whitehorse in the Yukon in search of work.

During that investigation, the body of a man who was neither McLeod nor Schmegelsky was found 2km down the road, the RCMP said. The man has not yet been identified.”It is unclear at this time how this deceased male might be connected with [the] vehicle fire or the two missing men,” the force said in statement.

The RCMP provided a composite sketch of the dead man at a Monday press conference and appealed for help to identify him. They have not released information about the manner or time of his death.

“It’s unusual to have two major investigations undergoing of this nature in northern BC at the same time,” Ms Shoihet said. The police are proceeding with the knowledge that there’s a possibility the investigations could be linked, she said.

Ms Shoihet cautioned the public and tourists to the area to have “heightened vigilance” in the remote region where there is little or no cellphone coverage. Notifying others of a planned route and periodically checking in are important safety steps, she said.

Fowler, whose father Stephen Fowler is one of New South Wales’s top police officers, had been living in British Columbia when Deese came to visit him from Charlotte, North Carolina.

The couple had met at a hostel in Croatia in 2017 and had travelled together across the US and abroad to Mexico, Peru and elsewhere.

After their bodies were discovered, a New South Wales (NSW) police force spokesperson told reporters the couple “may have been shot”. But the RCMP have not yet released a cause of death for the pair.

“Our son Lucas was having the time of his life travelling the world,” Stephen Fowler said, speaking at the same press conference on Monday. Fowler said his family were “overjoyed” about his relationship with Chynna and the adventures they had, before their untimely deaths turned it into the “worst ever love story”.

As for the planned van trip, he said: “He communicated with us as they were leaving. What happened after that, time will tell.”

Fowler declined to comment further on the ongoing investigation, beyond pleading with members of the public to come forward if they knew anything.

“This investigation is in its very infancy and it is not yet clear whether Lucas and Chynna were targeted or if this was a crime of opportunity,” Ms Shoihet said in an earlier release. The RCMP released a composite sketch of a man of Caucasian descent seen speaking to Lucas Fowler who is a person of interest in the case.

Some media speculated that the deaths could have been the work of a single killer or that they may be linked with the “Highway of Tears” – the remote stretch of road where at least 40 Indigenous women have gone missing or been found murdered since 1970.

But so far there is no indication that the crimes are at all linked to the Highway of Tears investigations, Shoihet said. Several murderers are believed to have been responsible for the crimes along the notorious section of British Columbia’s Highway 16 – which is approximately 1,000km away from the current investigations.

Two NSW police detectives have accompanied the Fowler family to Canada and will be assisting as liaisons between the family and the investigation, Fowler said. – Guardian News and Media 2019