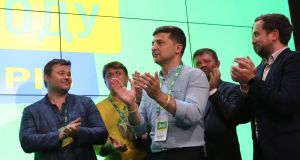 The West has hailed Ukraine’s parliamentary election as a catalyst for major reform, and Moscow tentatively welcomed it as a “vote of hope”, as the country’s president Volodymyr Zelenskiy and his allies pondered candidates for key posts.

With 97 per cent of votes counted from Sunday’s ballot, Mr Zelenskiy’s Servant of the People party was set to fill 253 of 424 seats in parliament, becoming the first party in the country’s independent history to secure an overall majority in the assembly.

None of the incoming deputies from Servant of the People are professional politicians, and they include figures from the worlds of business, activism, law, entertainment and sport.

Following the presidential elections . . . the Ukrainian people have once again given a strong mandate for reform for the next five years

In what will be a historic shake-up for Ukrainian politics, about three-quarters of all new deputies will be serving in parliament for the first time; most will be in their 30s and 40s, and one-fifth of them will be women.

Servant of the People – named after a TV comedy in which Mr Zelenskiy played a fictional president – swept to power on promises to crush corruption, reinvigorate the economy and seek an end to the war in eastern Ukraine, and it rode the momentum created by its founder’s landslide presidential election win in April.

“Following the presidential elections . . . the Ukrainian people have once again given a strong mandate for reform for the next five years,” said European Union foreign affairs spokeswoman Maja Kocijancic.

“We look forward to continuing to advance our political association and economic integration and deliver on the reform process . . . furthering the rule of law, fight against corruption, energy and macro-economic stability, to the benefit of Ukraine’s citizens,” she added.

The EU and United States have backed Kiev diplomatically and financially since its 2014 Maidan revolution, when it pivoted to the West and Russia responded by seizing Crimea and fomenting a separatist war in eastern Ukraine.

“Congratulations to the people of Ukraine – a strong vote for reform!” tweeted Kurt Volker, the US special envoy to the country.

Mr Zelenskiy (41) hopes to secure the release of Ukrainian prisoners-of-war in Russia as soon as possible, and to resume talks to end a conflict that has killed more than 13,000 people and badly damaged Ukraine’s economy.

We will continue to follow closely the situation in Ukraine . . . The new Ukrainian authorities will be judged according to their practical deeds

Russia’s foreign ministry welcomed the election performance of the Kremlin-friendly Opposition Platform – For Life bloc and defeat for Mr Poroshenko’s allies and for a Ukrainian nationalist party that failed to gain enough votes to enter parliament.

“It seems this could be called a ‘vote of hope’,” the ministry said.

“We will continue to follow closely the situation in Ukraine . . . The new Ukrainian authorities will be judged according to their practical deeds.”

Mr Zelenskiy wants a well-regarded economist to be his prime minister, and Ukrainian media say gas executives Andriy Kobolev and Yuriy Vitrenko and IMF official Vladyslav Rashkovan are contenders. The president on Tuesday named anti-corruption expert Ruslan Ryaboshapka as a candidate for prosecutor-general.