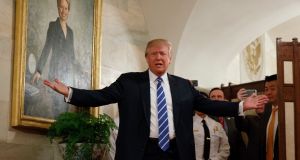 On this week’s edition of World View, Suzanne Lynch reports from Washington, DC, on another eventful, confounding week in Donald Trump’s America.

She explains why a new ban on travel to the US from certain Muslim-majority countries is likely to be more robust than January’s executive order, which was struck down in court.

She also outlines what is known about Mr Trump’s allegation that his phone was tapped by former president Barack Obama.

Also joining the podcast are our Berlin and Paris correspondents, Derek Scally and Lara Marlowe, who discuss the upcoming elections in Germany and France that could transform the face of European politics for decades.

They ask the question: has the high-water mark of right-wing populism been reached yet?

Get World View for free every week by subscribing in iTunes. You can listen to or download the podcast via Soundcloud, while Android users can access it via Stitcher.You can also find the latest episodes on The Irish Times app.

Czech health chief quits as coronavirus surges in eastern Europe 17:49
Cyprus blocks EU sanctions on Belarus over rigged election 17:17
Deaths of hundreds of elephants may have been caused by toxic algae 16:45
Downing Street denies reports Boris Johnson went on secret Italy trip 16:07
UK warned it could have 50,000 coronavirus cases a day by mid-October 17:56