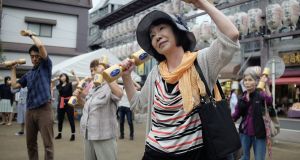 People working out in the grounds of a temple in Tokyo to celebrate Japan’s Respect for the Aged Day.Two-thirds of Japan’s over-65s say they want to stay gainfully employed. Photograph: Kazuhiro Nogi/AFP/Getty Images

Japan is struggling to deal with its huge and growing population of dementia sufferers.

One of many nondescript cities that dot greater Tokyo, Iruma may have earned its place in medical history with a novel experiment: bar-coding its elderly.

The local government has begun issuing free one-centimetre QR-coded tags containing the address, telephone number and identity number of the wearer. The adhesive tags are attached to the fingernails of elderly dementia sufferers. If they wander off, police can read the tags and contact relatives.

Roughly 10,000 dementia patients go missing in Japan every year and hundreds turn up dead, or not at all. Those who stroll into the path of a speeding train can suffer a posthumous indignity: a bill for the cost of the accident.

One man who lost his father this way recalls staring in disbelief at a carefully itemised invoice from the railway company for 7.2 million yen (about €60,000).

More than five million of Japan’s elderly suffer from dementia. By mid-century, an alarming 10 per cent of the population could be afflicted, warns Dr Toshiharu Ninomiya of Kyushu University.

Most live at home, in the care of relatives. A survey released in 2016 says three -quarters of people looking after elderly family members are at their wits’ end and many have considered suicide, or worse. In 2015 Japanese police recorded of 44 cases of murder or attempted murder in such homes.

Japan has made great strides in dealing with its inverted population pyramid. Retirement has been delayed and the elderly increasingly drive taxis, guard banks and serve in supermarkets.

About 12.6 million of Japanese aged 60 or older now opt to keep working, up from 8.7 million in 2000. Two-thirds of Japan’s over-65s say they want to stay gainfully employed.

Funding of long-term care for the elderly, at 1.2 per cent of GDP, however, is below other rich countries, according to the OECD. Relatives are still overwhelmingly viewed as the main caregivers in Japan. Family members often quit work and plough through savings to look after senile parents.

Professional care might help but for an acute shortage of nurses. About 130,000 elderly people could be left without beds in care homes in Tokyo alone by 2025, predicts one report. Nursing is poorly paid and turnover is high.

A think tank floated one desperate solution: moving the elderly out of the capital to the less populated regions. The Japan Policy Council said the task of looking after 5.7 million very old people in Tokyo will overwhelm already stretched services.

The idea raised eyebrows: government ministers were forced to deny that it was bringing back ubasute, the mythical ancient custom of dumping the elderly on mountains to die.

“That requires adjustments that no other country has had to make in the absence of war, epidemics or famine.”

The company argued that the man’s son and wife were responsible because they “did not fulfill their obligation” to monitor him. It was the first time the court had ruled on the liability of families in dementia cases.

The victim, who was 91 when he died, slipped out the door and stumbled on to the tracks after his elderly wife dozed off. A local court had earlier ruled that if his relatives were unable to look after him round the clock they should have sought professional help.

What many do not realise, says the victim’s son, who asked to remain anonymous, is how expensive and exhausting it is, looking after parents who have become children. “At least his death has forced society to think more carefully about how it treats such people,” he says.

The supreme court ruling exposed a crucial legal question, says Coulmas. “State or family – who will accept responsibility and care for legions of people unable, to various degrees, to articulate their interests and care for themselves? Lawmakers will have to provide an answer that is socially acceptable.”

Japan, he says, is ahead of the pack, but before long much of Western Europe will face similar problems.

1 Six weeks of Level 5: Non-essential shops to close, no visitors to homes and a 5km travel limit
2 Life under Level 5: What will the next six weeks look like for the State?
3 Level 5 latest: Gardaí to be given new powers to fine people for holding house parties
4 Covid-19: State moves to Level 5 for six weeks with hopes of ‘meaningful’ Christmas celebrations
5 Cork city centre is hit by flooding as River Lee bursts its banks
Real news has value SUBSCRIBE