U.S. President Donald Trump accuses former President Barack Obama of wiretapping him in October during the late stages of the presidential election campaign, but offers no evidence to support the allegation. Video: Reuters 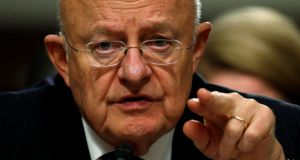 The FBI is disputing Donald Trump’s claim that Barack Obama had his telephones tapped during the election, according to reports.

The head of the FBI has asked the Justice Department to dispute the unsubstantiated allegation, the New York Times said.

Mr Trump turned to Congress on Sunday for help finding evidence to support his claim, but the move has potential risks for the president, particularly if the House and Senate intelligence committees unearth damaging information about Mr Trump, his aides or his associates.

He claimed in a series of tweets without evidence on Saturday that his predecessor tried to undermine him by tapping the telephones at Trump Tower, the New York skyscraper where Mr Trump based his campaign and transition operations, and maintains a home.

“Absolutely, I can deny it,” said Mr Clapper, who left government when Mr Trump took office in January. Other representatives for the former president also denied the allegation.

The New York Times reported FBI director James Comey has argued the claim must be corrected by the Justice Department because it falsely insinuates that the FBI broke the law.

Mr Spicer said the White House wants the congressional committees to “exercise their oversight authority to determine whether executive branch investigative powers were abused in 2016”.

He said there would be no further comment until the investigations are completed.

House Democratic leader Nancy Pelosi said: “It’s called a wrap-up smear. You make up something. Then you have the press write about it. And then you say, ‘everybody is writing about this charge’. It’s a tool of an authoritarian.”

Mr Spicer’s chief deputy, Sarah Huckabee Sanders, said she thinks Mr Trump is “going off of information that he’s seen that has led him to believe that this is a very real potential”.

Josh Earnest, who was Mr Obama’s press secretary, said presidents do not have authority to unilaterally order the wiretapping of American citizens.

FBI investigators and Justice Department officials must seek a federal judge’s approval for such a step.

He accused Mr Trump of levelling the allegations to distract from the attention being given to campaign-season contacts by Trump aides with a Russian official, including Jeff Sessions before he resigned from the Senate to become attorney general.

The FBI is investigating those contacts, as is Congress.