6,000 people in Hyderabad to be put in special facility before arrival of Trump daughter 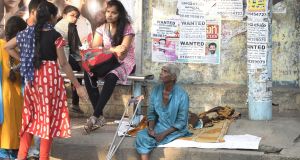 A beggar on the side of the road in Hyderabad, India. A senior police official said beggars would be “housed” in structures adjacent to the city jail where they were being provided with food and medical assistance. Photograph: Noah Seelam/AFP/Getty Images

Police have launched a drive to clear India’s southern city of Hyderabad of beggars ahead of Ivanka Trump’s visit there later this month.

Officials estimate that about 6,000 beggars and homeless people will be rounded up over the next fortnight and housed in a special detention facility, located adjacent to the city jail, in accordance with the recent order of Hyderabad police commissioner M Mahenddar Reddy.

Ivanka Trump, daughter of US president Donald Trump and one of his official advisers, will visit the city to attend a global two-day entrepreneurship summit, which begins on November 28th. Prime minister Narendra Modi invited Ms Trump to the summit during his visit to the White House in June.

“We have instructions to make the city beggar-free,” assistant police commissioner Narender Reddy said of the order, which is valid for two months.

Anyone found violating the ban will be liable for punishment, he added, but did not elaborate further on the directive. Other senior officials denied that the anti-beggar drive was linked to Ms Trump’s visit.

“It’s a permanent exercise [to make the city beggar-free],” director general of prisons V K Singh told CNN. He said officials had been trying to figure out what to do with beggars for more than three decades.

The senior police official denied that the beggars were being jailed, insisting they were being “housed” in structures adjacent to the city jail where they were being provided with food and medical assistance. One such facility, he added, was named “Anand Ashram” or Hermitage of Happiness.

City residents, however, said that the last time such a measure was executed was in 2000, when then US president Bill Clinton visited the city that has emerged as a major Indian information technology hub.

According to official statistics, India has more than 400,000 beggars, but in reality this number is far higher as income disparities have escalated in recent years.

Mr Modi’s then newly elected administration announced a novel scheme two yeas ago involving beggars, under which it aimed to “gainfully employ” some 3,000 who travelled on India’s vast rail network as minstrels – or buskers – to sing paeans to the PM’s numerous schemes.

The federal information ministry planned on “tutoring” these troubadour beggars to switch from robust Bollywood numbers to songs praising the prime minister’s initiatives on cleanliness, female empowerment, poverty alleviation and numerous other schemes.

The Song and Drama Division of the state-run All India Radio was to train this army of singing beggars, but the scheme failed to take off and was eventually abandoned.