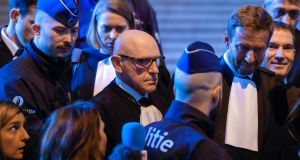 The lawyer acting for ousted Catalan leader Carles Puigdemont has said the court hearing for his client and four secessionist allies on whether they should be extradited to Spain has been pushed back until December 4th.

The court hearing in Brussels for the five secessionist rebels is the latest step in their flight from Spain to Brussels and their refusal to return to face rebellion and sedition charges that could land them in jail for 25 years.

Before the court session, the prime ministers of Spain and Belgium discussed their bilateral relations, which have been strained over the situation of the Catalan officials, who are wanted on a Spanish arrest warrant.

Mr Puigdemont’s lawyer Paul Bekaert said after the first court session: “We will argue the case on December 4.”

Whatever decision is made at that stage, two appeals will be possible and a final ruling could well only come only after the December 21st election day in Catalonia.

Mr Bekaert said even though the prosecutor asked for the execution of the extradition request from Spain for the five, the defence lawyers could still give written arguments until early next month.

“So nothing has been decided today,” he said.

The prosecutor added that, according to Belgian law, there was no corruption on the part of the Catalan five but a “conspiracy of civil servants”. He said that for a refusal to fully commit to their jobs, “there can be no extradition”.

The Belgian government says it cannot intervene in Spain’s extradition request as it is up to the country’s independent judiciary to make a decision.

“It is a judicial case based on the separation of powers. It is up to the judicial authorities,” prime minister Charles Michel said after meeting his Spanish counterpart Mariano Rajoy on the sidelines of the European Union summit in Gothenburg, Sweden.

Mr Michel’s spokesman, Barend Leyts, said the talks were “constructive” and did not centre on the Catalan issue, but the extradition issue continued to create unease.

Spain supplied the Belgian prosecutor with information detailing the jail conditions for the five Catalans if they are extradited.

Interior minister Juan Ignacio Zoido said all the information requested had been sent but pointed out that “Spain has been a state of law for many years”, adding that “nobody in Europe is going to give us lessons”.

The ministry said the ousted Catalan government members, who are being sought for alleged rebellion, sedition and embezzlement, would have access to their lawyers. – AP