Musician killed by bear in Canada while gathering nature sounds 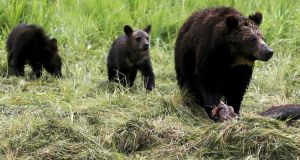 Officials have not identified the type of bear involved in the incident in which Julien Gauthier died but said two bears - a grizzly and a black bear - were killed last week as part of the investigation. File photograph: Jim Urquhart/Reuters.

A French artist who used the sounds of nature in his music has been killed by a bear in Canada.

Friends said Julien Gauthier (44) was the victim of an attack after a bear entered a camp near the village of Tulita, in the Northwest Territories last week. The police have not yet publicly identified the victim.

Gauthier was travelling with a biologist, Camille Toscani, on an expedition in the sparsely populated area, recording new sounds for his work. The pair had planned to travel from Fort Providence to Inuvik, two towns separated by more than 1,500km of wilderness, in 30 days.

Ms Toscani told the French newspaper Le Parisien that the bear entered their camp at night and dragged Gauthier away.

The Royal Canadian Mounted Police said they received a distress signal from Ms Toscani after she managed to locate another group of hikers after the attack. Poor weather delayed the recovery of Gauthier’s body until the next day.

Officials have not identified the type of bear involved in the incident but said two bears - a grizzly and a black bear - were killed last week as part of the investigation. The bears were taken for tests to determine if either was responsible for the attack.

Despite the number of bears in the region, attacks on people are rare. Megan Wohlberg, a spokesperson for Natural Resources Canada, said there had been four fatal animal attacks against people in the Northwest Territories in the last 20 years.

Friends paid tribute to Gauthier. Marc Feldman, of the Bretagne Symphonic Orchestra, wrote on the orchestra’s Facebook page: “His work was faithful to his curious spirit, humble in front of the vast power and beauty of nature. First of all he wanted to transmit by his music to the public his love and respect for nature.”

Gauthier’s last post on social media, eight days before his death, chronicled the “intense, tiring and inspiring” time he had spent in the rugged landscape. - Guardian