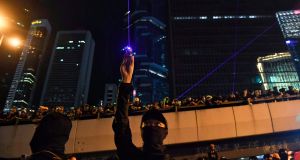 Hundreds of thousands of Hong Kong people flocked to a downtown park for a fresh rally after two months of increasingly violent clashes that have prompted severe warnings from Beijing and failed to win concessions from the city’s government.

Police turned down a plan for Sunday’s march – from Victoria Park to the central business district – submitted by the Civil Human Rights Front, which has organised past demonstrations that drew millions. Police did, however, give permission for a rally at the park instead.

Huge crowds filled the park on Sunday afternoon and spilled on to nearby streets, forcing police to block traffic in the area. Torrential rain came down an hour into the rally, turning the park into a sea of colourful umbrellas. Many began walking on the streets, despite the police ban on a march, as the park got overcrowded. They risk being charged with unlawful assembly, which can lead to a maximum of five years in prison.

Streets around Victoria park were so densely packed that the march came to a complete standstill in many places. Some protesters even walked on to a flyover near the park. Protesters were orderly but burst into choruses of slogans as they waited to move forward. “Hong Kong people, go!”, “Reclaim Hong Kong, revolution of our era!” they chanted.

The crowd was a cross-section of young protesters, families and elderly residents. Parents walked with small children, shielding them from the crowd.

By early evening hundreds of protesters occupied a six-lane road outside the government, shining lasers and yelling insults at the police. As protesters marched past the police headquarters, they chanted “Triads!” and “Return the eye!” referring to a recent incident in which a young woman lost an eye during the protests.

Organisers insist that the Hong Kong government must stop using police force to suppress them and respond to their five political demands, including the complete withdrawal of the now suspended extradition Bill, which can see individuals sent to China for trials; the setting-up of an independent body to investigate police violence; and allowing universal suffrage.

“We are here to express our anger against police violence. Hong Kong is deeply outraged by the police,” said an organiser on stage.

“China is taking over Hong Kong. Our society has no justice and no future. We’re just making a last-ditch attempt to do something amid our despondency,” said Carol Lui, a teacher in her 30s. “Hong Kong is dying anyway so we are just fighting to our last breath.”

The Civil Human Rights Front called for a “peaceful, rational and non-violent” rally, and online posts also urged “self-discipline and calmness” after 10 weeks of intensive protests, many of which ended in violent clashes as police increasingly employed tear gas and rubber bullets to disperse the crowds.

“We hope that there will not be any chaotic situations today,” said organiser Bonnie Leung. “We hope we can show the world that Hong Kong people can be totally peaceful.”

On Saturday a spokesman for China’s ceremonial legislature condemned US lawmakers voicing support for the pro-democracy movement and claimed Hong Kong’s 7.5 million people and Chinese population as a whole rejected the actions of a “very small group of violent protesters”.

You Wenze called comments by US politicians, including House speaker Nancy Pelosi, “a gross violation of the spirit of the rule of law, a blatant double standard and a gross interference in China’s internal affairs”.

Hong Kong, a regional financial hub once known as one of the world’s safest cities, has seen numerous violent confrontations between police and hardcore protesters who have thrown rocks, bricks and Molotov cocktails and used slingshots and laser pointers to provoke police or inflict revenge.

Ahead of Sunday’s rally, a post on lihkg.com, a forum popular with protesters, said: “Hongkongers can change our tactics in the ‘be water’ style instead of being ruled by anger and hatred.”

Although the post called for protesters to shun protective gear and refrain from occupying roads and throwing objects – something many have increasingly resorted to – many online responses also dismissed the call for peace, insisting the movement would be ineffective if it stayed peaceful.

Hong Kong had its first tear gas-free Saturday for weeks after three separate rallies took place in Kowloon. The marches this Saturday and Sunday marked the 11th weekend of protests in Hong Kong as residents continue to press the government to formally withdraw the controversial extradition Bill.

Despite the call for peace, a number of protesters on Sunday still covered their faces with masks and scarves, fearing they would face prosecution. “I still worry police might use tear gas and beat up people today,” said Alan Chan, who has young children. “The Chinese government is hardening its stance and threatening us with the People’s Liberation Army.”

Tensions have reached a new level during the past week. Following last weekend’s violent clashes with police, protesters swarmed Hong Kong’s airport. Over the past week, state media outlets have published videos showing armoured troop carriers purportedly driving to Shenzhen, the south-eastern state that borders Hong Kong. Chinese officials have also released a series of threatening statements about Hong Kong’s protesters, with one claiming “terrorism” was emerging in the city after flights were cancelled.

A front-page editorial in the Communist Party mouthpiece People’s Daily on Saturday said protests in Hong Kong had been hijacked and incited by “internal and external anti-China forces” and questioned how Hong Kong’s economy could withstand such “suicidal attacks”.– Guardian