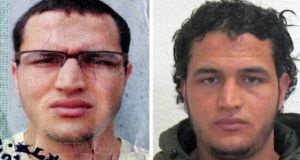 An undated handout made available by German Federal Criminal Police Office shows suspect Anis Amri who is being searched for in connection to Monday’s terror attack in Berlin. Photograph: EPA/BKA

Germany is offering a €100,000 reward for information leading to the arrest of Anis Amri, a 24-year-old Tunisian national suspected of involvement in Monday’s Christmas market lorry attack in Berlin which killed 12.

Below is a timeline of Amri’s movements, from the time he left Tunisia to the date of the attack.

2009: The 24 year-old’s father said his son left Tunisia seven years ago, the brother says it was 2011. He travelled to Italy where, along with countless others, he landed on the island of Lampedusa. There he was convicted for helping start a fire, apparently part of a protest at facilities there.

Spring 2015: After serving a four-year term Amri is released from prison in Sicily, according to Italian news agency Ansa.

July 2015: Amri enters Germany via Freiburg, in Germany’s southwest. Since then authorities said he was “highly mobile”, registered under different identities - “Ahmad Z”, “Mohamed H”, variously from Egypt and Lebanon - with authorities in the southwestern state of Baden-Württemberg, in the western state of North-Rhine Westphalia and in Berlin.

January 2016: He first attracted the attention of security services after he made contact with an extremist Islamist preacher in Dortmund.

February 2016: Amri appears to have moved permanently to Berlin where he reportedly worked as a drug dealer in the city’s notorious Görlitzer Park

February 5th 2016: Criminal police advise “intensive permanent observation” after rating him as a “danger”, one of 549 people in Germany with this status, after clues that he was seeking co-conspirators for an attack. An informant told Berlin’s criminal police (LKA) Amri had tried to buy a gun from him.

April 2016: Amri applied for asylum in Kleven in North Rhine-Westphalia and assigned to a refugee home in nearby Emmerich

June 2016: Asylum application rejected, reportedly because his identity could not be ascertained.

July 2016: Charged with grievous bodily harm after a stabbing incident in a dispute over drugs. Picked up by police on a long-distance bus, who discover he was due to be deported. A court in Ravensburg officially orders him to be placed in deportation prison. Deportation halted two days later because he had no valid papers. A new passport was sought for him from the Tunisian embassy, which initially disputed he was a citizen.

Summer 2016: He was detained briefly in Berlin after arriving in the city from western Germany by bus. Despite a tip-off that Amri was planning a break-in to steal automatic weapons, LKA ends its observation and Amri was held only briefly, then let go.

November 2016: Amri is classified as a danger to German security and placed on another watch list but disappears

December 19th: A hijacked lorry belonging to a Polish transport company crashes into a Christmas market in western Berlin, killing 12 and leaving 48 injured. Police discover the legitimate driver of the truck, a 37 year-old Polish man, shot dead in the passenger seat. Under the driver’s seat, they say they find ID papers belonging to Adis Amri.

December 21st: North Rhine-Westphalia’s interior minister Ralf Jäger told journalists the suspect’s new Tunisian passport, allowing a deportation, arrived the previous day, hours after the attack. German authorities launch a Europe-wide manhunt for Amri, with a €100,000 reward for clues and a warning: “May be armed and dangerous.”