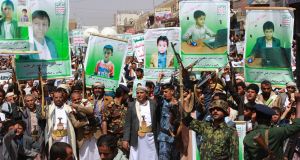 Supporters of Yemen’s Houthi rebels raise Kalashnikovs and signs depicting children killed in a Saudi-led coalition air strike on a bus in August, at a rally in Saada. Photograph: Stringer/AFP/Getty

UN-mediated peace talks between the Yemeni government and Houthi rebels, which were set to convene on Friday, foundered after the Houthis refused to leave the country’s capital Sanaa until their passage to and from Geneva was guaranteed by Saudi Arabia’s airforce, which controls the country’s airspace.

The Houthis said the UN had not secured Saudi clearance for the Omani plane due to transport them to Geneva and expressed concern the Saudis could strand them outside Yemen, as they did for three months in Oman after the collapse of 2016 talks in Kuwait.

They also insisted their aircraft should evacuate scores of wounded to Oman and repatriate those who had received medical care.

The Yemeni government’s foreign minister Khaled al-Yamani said the demands were two separate issues and threatened to leave Geneva if the Houthis failed to arrive.

The collapse of the talks risks escalating the conflict devastating the country and prolonging the terrible suffering of 28 million Yemenis.

The UN says 8.4 million are on the brink of starvation, 18 million are food-insecure, and millions are at risk of infection by cholera and diphtheria. The UN stopped estimating the number of civilian deaths two years ago when the figure for combatants and civilians was 10,000.

The Geneva meeting was to be the first since 2016, when 108 days of talks failed to reach a deal between the Sunni Saudi-sponsored government headed by President Abed Rabo Mansour Hadi and the Shia Houthis, who receive marginal political backing from Riyadh’s regional rival Tehran.

Ahead of the meeting the UN Security Council had called on both sides to “take a first step towards ending a conflict that has brought severe pain and humanitarian suffering to the Yemeni people”.

In response to the standoff, UN envoy Martin Griffiths said he was “mindful of the challenges associated with bringing the parties together [in] Geneva, bearing in mind they haven’t met for two years”.

The third UN mediator to try to end the conflict, Griffiths conducted intensive shuttle diplomacy to prepare for this encounter which he had called a “flickering signal of hope”.

During this meeting the parties were meant to hold exploratory talks on direct negotiations and confidence-building measures. Griffiths’s initial aims are to halt Houthi missile attacks on Saudi Arabia in exchange for an end to Saudi bombing of Yemen and to form a transitional administration. Ultimately, he seeks to end the war, ensure the withdrawal of foreign forces, and achieve the formation of a national unity government.

The Saudi-led coalition has come under increasing international pressure to end the war launched in March 2015 after the Houthis occupied Sanaa and the strategic port of Aden. Riyadh expected a quick victory but became bogged down in a stalemated conflict.

An international outcry has halted an all-out coalition offensive on Yemen’s Red Sea port of Hodeida, the main entry for food, fuel, medical supplies and humanitarian aid. Pressure mounted recently after Saudi air strikes killed 44 children in the north and 26 children in the south. US Congress members have called for a suspension of weapons deliveries to Saudi Arabia while Spain has cancelled arms sales.

The government is facing widespread protests against a steep fall in the Yemeni currency, rising prices, failure to pay civil servants and rampant corruption. The country’s sole exporting oil producer has threatened to suspend exports if protesters’ demands are not met.

While the Houthis control Sanaa, the north and the majority of Yemen’s population, the situation in the south is complicated. The Saudis sponsor the regime but the region’s territory is held by separatists tied to the Saudis’ chief military ally, the United Arab Emirates.

1 Coronavirus: Republic reports 22 further deaths, 424 new cases
2 Coronavirus Q&A: How to shop safely during Covid-19
3 Coronavirus: Situation in Ireland being ‘misrepresented’ because of limited testing
4 Ireland has strategy to ‘break the chains’ of coronavirus - WHO’s Mike Ryan
5 We need to cancel the Leaving Cert and give students predicted grades
Real news has value SUBSCRIBE