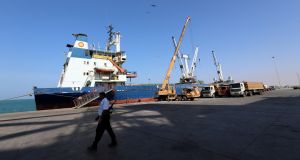 Yemen peace talks were held on board a UN-chartered boat anchored in the Red Sea on Sunday in an attempt to find a neutral venue acceptable to both sides.

Retired Dutch general Patrick Cammaert, the head of the UN mission in Yemen, chaired the meeting on the ship moored off the port city of Hodeidah after Houthi rebel military officials refused to meet in government-held areas in southern Hodeidah, citing security fears.

The disputes over the venue for talks had prevented military leaders from the two sides meeting since January 2nd. The first two meetings had been held in Houthi-controlled zones.

The meetings of the regional redeployment committee (RCC) are seen as critical to building on a UN-brokered agreement reached in Stockholm in December designed to see Houthi fighters redeploy out of the port and city of Hodeida. The Stockholm agreement envisages a new security force taking over the city that is critical to preventing famine and opening humanitarian corridors.

The UN envoy, despite delays and setbacks, remains optimistic that progress can slowly be made – partly because external forces, including the US and Saudi, recognise a purely military solution in Yemen might come at an unacceptable price.

The UN ship on Saturday first picked up the Yemen government delegation before anchoring overnight in Hodeidah port, and then taking on board the Houthi negotiators on Sunday.

The RCC is arguably the biggest prize to emerge from Stockholm. If the dispute over its venue had continued, the key institutional structure underpinning the ceasefire would have been in jeopardy.

The Red Sea port is the entry point for the bulk of Yemen’s imported goods and humanitarian aid, providing a lifeline to millions in the Arab world’s poorest country.

Both the Saudis and the United Arab Emirates are sceptical that the Houthis will abide by the Stockholm agreement, and cannot imagine Houthis voluntarily leaving a port that gives them both access to revenue through imposing taxes and control of food and commercial supplies.

The overall conduct of the UN talks is headed by a former British diplomat, Martin Griffiths.

1 Caroline Flack death: Public disquiet over media conduct grows
2 Life as a female TD: ‘If I had a euro for every time I’ve been called the C word’
3 Storm Dennis: Wind warning in place as 8,000 without power
4 EU and UK will ‘rip each other apart’ in Brexit talks
5 ‘House the Irish First’ group halts building work on 65 social homes in west Dublin
Real news has value SUBSCRIBE