‘The nation has stood up’: Indigenous clans in Canada battle pipeline project 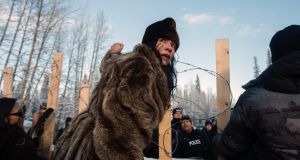 Sabina Dennis and other activists react as the Royal Canadian Mounted Police prepare to clear a barricade set up by a First Nations group at the Gitdumden checkpoint near Houston, British Columbia, Canada. Photograph: Amber Bracken/The New York Times

Amid vast forests of spruce, pine and poplar trees, deep in the interior of British Columbia, the Royal Canadian Mounted Police arrived at a small bridge last month to clear a group of First Nations people who had set up a blockade across a narrow, gravel logging road.

Dozens of officers, some equipped in military-style tactical uniforms and carrying semi-automatic rifles, stared across a plywood and barbed wire roadblock at the Wet’suwet’en people and their supporters gathered behind it. A helicopter circled overhead and police boats were deployed on the pristine Morice River running nearby the protest site.

“You’re trespassing on Wet’suwet’en land,” Molly Wickham yelled at the police. She is the spokeswoman for the Gitdumden checkpoint, as the blockade and surrounding encampment is known, after one of the clans of the Wet’suwet’en people who claim this part of the province.

But the officers ignored her and started to systemically dismantle the blockade, cutting the wire and pushing against the wooden structure, testing for weak spots. Three protesters had locked their arms to it, and the pressure hurt, causing them to cry out.

“You’re going to break their arms,” other protesters shouted. “Stop!” The police kept going and the arrests began. The first person taken into custody was pulled over the top of the barricade and disappeared into a crush of uniforms. The second was tackled, his face pressed to the ground, after the officers breached the barricade.

Fourteen were arrested in total, including Wickham. Other protesters scattered, setting fire to felled trees to cover their retreat. Some were headed to another blockade and encampment farther down the same road, the Unist’ot’en checkpoint, named after another Wet’suwet’en clan.

The police were there to enforce a temporary injunction from the British Columbia supreme court, allowing pre-construction work to start on a 670km, 6.2 billion Canadian dollar (€4.1 billion) pipeline that would cross the traditional territory of the Wet’suwet’en. It would carry gas extracted from the Dawson Creek area of the province to the liquefied natural gas export terminal in Kitimat, British Columbia.

The protesters were hoping to prevent the work by blocking the lone access road to where construction would begin. The company behind the pipeline, Coastal GasLink, has signed agreements on the project with all 20 of the elected councils representing First Nations people along the route. Coastal GasLink has also conditionally awarded CA$620 million in contract work to indigenous businesses as part of the pipeline project.

Our children, our land, our future, is here and that’s what we are going to protect

But the protests at the two checkpoints highlight a dual leadership structure among the Wet’suwet’en people. Most of their elected councils, which operate on government-established reserves with set boundaries, gave their go-ahead for the pipeline.

Most of the hereditary chiefs, however – who collectively claim title to a New Jersey-sized section of British Columbia and represent the traditional governance of the Wet’suwet’en – were opposed. A spokeswoman for Coastal GasLink, Jaqueline Benson, said in an email that the company respects both leadership systems and has held 120 meetings with Wet’suwet’en hereditary chiefs since 2012, as well as logging 1,300 phone calls and emails with them, trying to reach a solution.

In December, after the court injunction allowing work to proceed had been issued but before the police arrived, five of the hereditary chiefs gave a news conference at the Gitdumden checkpoint to explain why they remained opposed to the pipeline, despite the economic benefits promised the Wet’suwet’en people in the agreements with the councils.

“Money means nothing to us,” said Chief Madeek (69), one of the hereditary leaders, who also goes by Jeff Brown. “Our children, our land, our future, is here and that’s what we are going to protect.” He added: “Our people never ever surrendered or ceded any portion of this territory. We are the rightful titleholders of the territory, we are the caretakers of this land and that’s what we are going to do, take care of this land.”

The land claimed by the hereditary chiefs is covered by a landmark 1997 decision from Canada’s supreme court, Delgamuukw v British Columbia, which ruled that the province could not extinguish indigenous titles to the land. But many of the details of the land claim, including the boundaries, remain unresolved.

Protecting the Wet’suwet’en claim to the land is what drove Wickham to join the blockade at the Gitdumden site, a scrappy collection of canvas tents bathed in wood smoke. Before her arrest, she spoke about her hopes for her children as her daughter, Lily (3), bounced around with a bright blue tutu pulled over her winter clothes.

She said she saw a connection between the despair of her people, for whom suicide is the leading cause of death up until age 44, and the devastation of traditional land. “I need to protect my kids from that. I don’t want them to grow up in a world where they feel like they have to kill themselves,” she said, adding that she is determined for her children to know their language, their songs and the land of their ancestors.

Indigenous groups have tried to stall, with varying degrees of success, oil and gas projects across the country

Like all of those arrested, Wickham (37), was released from custody within two days. Some parts of the roughly 22,000sq km of territory claimed by the Wet’suwet’en have become farmland, towns or industrial developments. But beyond the Unist’ot’en checkpoint, which anti-pipeline protesters have maintained for years, more than 1.300sq km of Wet’suwet’en claimed land remains a refuge for spawning salmon as well as bears, moose, beaver, grouse, eagles and martin. It is abundant with the berries and plants the Wet’suwet’en harvest for food and medicine.

The Unist’ot’en camp has become an important part of a broader movement of indigenous resistance to Canada’s fossil fuel ambitions. By asserting their sovereignty over the land, indigenous groups have tried to stall, with varying degrees of success, oil and gas projects across the country.

Freda Huson (54), spokeswoman at the Unist’ot’en camp, raised her family on a reserve and worked hard to pay off a house and five vehicles. Still, she said she wasn’t happy, so she came to this wilderness area in 2010 where, as a child, she had spent her holidays fishing and hunting. Since her return, she said her spirit has come back to life.

(67), an elected Wet’suwet’en chief, said he also deeply values the natural bounty and the cultural and spiritual importance of the land. But he said pipeline representatives had satisfied his concerns about the project’s environmental impact and told him the project would go ahead, with or without his signature, so he decided to make a deal.

The reserve he leads relies on federal government funding, and the community struggles to address underemployment and many social issues on a shoestring budget. With cash from the pipeline agreements, the community is planning a language centre in hopes of reviving fluency in Wet’suwet’en.

Jim is also a hereditary chief, and he said he wanted both arms of the leadership to find a shared solution to the split over the pipeline. “We have got to start working together,” he said.

A few days after the arrests at Gitdumden, the hereditary chiefs arrived at a difficult decision to comply with the temporary injunction, and, for the time being, the two checkpoints are open. The chiefs had expressed concern about exposing people to more arrests and violence, and the issue will return to court soon.