War and coronavirus-ravaged country to get $1.35bn from UN and Saudi Arabia 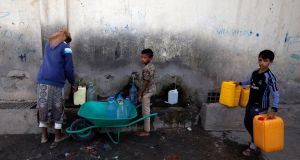 Yemenis collect clean water from a charity tap due to disruption of water supplies in Sanaa. Photograph: Yahya Arhab

The UN and Saudi Arabia on Tuesday raised $1.35 billion (€1.2 billion) at an urgent pledging conference for funds to rescue aid operations in Yemen as the coronavirus rampages through the war-ravaged country, which has long been the world’s worst humanitarian disaster.

This sum is far short of the $2.4 billion required to address the Yemen crisis until the end of the year despite a moving appeal by World Food Programme chief David Beasely, who said, “We are in trouble. We are not getting the money we need.”

UN under secretary general Mark Locock said efforts to secure additional funding would continue and urged donors to pay up. So far, only $474 million has been delivered for 2020.

The shortage of funds threatens to close 30 out of 41 major international programmes that provide food, healthcare and other essential services for 80 per cent of Yemen’s 28 million people. As Yemen teeters on the brink of collapse, Saudi Arabia promised $525 million, the UK $200 million, and the US $225 million.

Ahead of the conference UN humanitarian co-ordinator Lisa Grande warned that “anything below $1.6 billion and the operation will be facing catastrophic cutbacks.

“We won’t be able to provide the food people need to survive, or the healthcare they need or the water or sanitation or the nutrition support which helps to keep two million malnourished children from dying,” she said.

Medical staff have not received salaries since the virus emerged in early April.

Interference in the operations of aid agencies by Houthi rebels who control the more populous north has led the UN to cut services, while fighting in both north and south has restricted humanitarian access to frontline zones.

Ms Grande said donors should be encouraged to provide existential funding since the Houthis are striving to become more transparent in dealings with aid agencies.

Some $180 million is needed to contain coronavirus alone. The World Health Organisation’s regional emergency director, Richard Brennan, said there have been thousands of cases and hundreds of deaths, although official sources claim there are 354 cases and 84 deaths in the south and four deaths in the north.

Intensive care units report that 20 per cent of Yemenis treated for the virus are dying as compared to the world average of 7 per cent.

A Houthi spokesman dismissed the conference as a “silly attempt [by the Saudis to gloss over] their crimes” during an interview with rebel-sponsored al-Masirah television.

Critics of Saudi Arabia question its motives as it continues to wage war on the Houthis and to battle Yemeni separatists who have declared the southern provinces a “self-governing” area. They seek to re-establish an independent South Yemen by withdrawing from the 1990 unification deal with North Yemen.

Saudi Arabia and the Emirates unleashed an air and ground war in Yemen in March 2015 with the aim of restoring the Saudi backed-government under President Abed Rabbo Mansour Hadi, who had been expelled from the capital Sanaa by the Houthis.