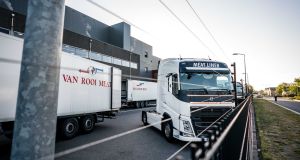 The Van Rooi Meat slaughterhouse in Helmond, The Netherlands, was ordered to close after an outbreak of Covid-19 was identified in its workforce. Photograph: Rob Engelaar/EPA

The high incidence of Covid-19 in some Dutch slaughterhouses threatens to cause a diplomatic row after the Romanian ambassador wrote to the government formally complaining about the “risks” to which migrant workers are being exposed – and demanding better policing of the industry.

It’s not the first time that working conditions in meat processing in the Netherlands have angered eastern European governments. Last year, the Polish ambassador lodged a similar protest claiming labour laws were being routinely “abused” in order to “exploit” migrant workers.

In response to the Polish complaint, social affairs minister Wouter Koolmees took the unusual step of acknowledging that the bad behaviour of “some employers and staffing agencies” in the meat sector was “unacceptable” and “risked damaging the country’s reputation”.

Around 10,000 workers in the country’s meat plants – some 80 per cent of the total – come from eastern Europe. In many cases they are employed through recruitment agencies on minimum-wage contracts that include crowded accommodation that makes social distancing impossible.

The letter by the Romanian ambassador, Brandusa Predescu, follows a visit she made last month to a factory run by the Dutch food processing giant, Vion, in the town of Scherpenzeel, where 28 male workers living together in three houses contracted the virus.

Vion, which produces meat and bacon for the US, UK, Canadian, Australian and Asian markets, reported a net profit of €26.6 million last year as exports to China shot up by 30 per cent.

The factory, which has a workforce of around 1,100, is a mainstay of the local economy and its closure is major blow.

Scherpenzeel, however, was just the beginning. Last week, three more plants – two of them owned by Vion in the towns of Groenlo and Apeldoorn and the third owned by Van Rooi Meat in Helmond – were also closed by coronavirus.

The Groenlo and Helmond operations were shut when outbreaks of the infection were identified in their workforces. The Apeldoorn plant was shut for “breaking official guidelines on the transport of staff”, allegedly by bringing them to and from work in packed minibuses.

Agriculture minister Carola Schouten had what were described as “tough” face-to-face talks with representatives of the meat industry last week at which Vion pledged to change working times to reduce contact between shifts, and to use bigger buses.

However, this did not placate Ms Predescu, the Romanian ambassador, whose letter to the Dutch government, drawing on her meeting with the Scherpenzeel workers, detailed their conditions and asked for more regular checking of factories and accommodation to ensure improvements are made.

As lockdown in the Netherlands continues to ease, in a message on her embassy’s website, Ms Predescu invites Romanian workers to report allegations of abuse or exploitation directly to the embassy.