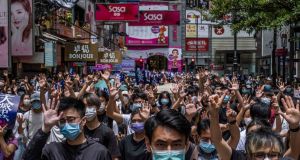 Beijing effectively announced last week that it had lost all patience with Hong Kong and was going to drop any pretence of tolerating true autonomy for the territory.

By declaring it would impose a wide-ranging national security law on the city – one that is used in mainland China to smother any signs of dissent – the party indicated it had had enough of the enraged pro-democracy movement and its protests.

By sidestepping the city’s legislature and elected officials to impose the law, and building in a clause that allows for China’s state security organs to set up shop in Hong Kong, it thumbed its nose at the Sino-British Joint Declaration it signed with London before the 1997 handover, as well as a host of other legal commitments.

The party’s higher echelons have long been consumed with the implosion of the  Soviet Union, a fate they fear could easily happen to them if they don’t learn from history

The expected international opprobrium came in the form of stern words from Washington, London, Brussels and beyond. And it was all quickly met with a shrug and a warning – don’t interfere in China’s internal affairs or there will be repercussions.

While China’s move stunned Hong Kong, the approach is in line with its increasingly strident manner in recent years. There was a marked shift in Chinese official attitudes in 2008 after Beijing hosted a successful Olympics, seen domestically as a great national coming-of-age party. Soon after, much of the world was crippled by the financial crash, but China escaped relatively unscathed and its rapid growth in the aftermath played a part in helping other nations get up off their economic knees.

In intervening years, as the economy boomed, we saw a burgeoning national confidence. In tandem, there was an increasing focus on ideological and political control, and a fair share of official paranoia too. The party’s higher echelons have long been consumed with the implosion of the Soviet Union, a fate they fear could easily happen to them if they don’t learn from history.

At a government-arranged dinner a while ago, an official listed off to me what the party had concluded were some of Moscow’s key failings: There was not enough discipline and they were too weak on dissent and criticism, he said; they let civil society take hold and allowed it to undermine central rule; and they didn’t control their peripheral areas tightly. These were just some of the Soviet mistakes that China would not be repeating, he said.

The coronavirus crisis has seemed to only bolster Beijing’s confidence, particularly as it observes the US and other western nations in disarray as a result of the outbreak

Criticising “so-called universal values” and “western individual ideas of human rights”, he said the Chinese government would not be apologising to anyone for delivering prosperity and stability, and for building a powerful nation-state. Like other young Chinese, he has only really known years of strong economic growth, and he felt China’s system was one to be proud of and one other nations should emulate.

His line was coming straight from Xi Jinping. When Xi took office seven years ago, an internal party communique known as Document No. 9 warned officials against liberal values and western ways of thinking, and put an emphasis on controlling and preventing ideas subversive to one-party rule.

The document criticised “extremely malicious” ideas such as constitutional democracy, freedom and human rights that could undermine the party’s control over Chinese society. Since then Xi has embraced an ever-more authoritarian style and tightened the clamps on all aspects of Chinese society.

On the wider stage the official tone has been increasingly bellicose. Just over the last few days Chinese troops clashed with Indian soldiers along their contentious border in the Himalayas, and China’s navy made further forays into disputed waters in the South China Sea.

For decades in its annual parliamentary report, Beijing has called for “the peaceful reunification” of Taiwan. In the report last week, the word “peaceful” was dropped for the first time.

The coronavirus crisis has seemed to only bolster Beijing’s confidence, particularly as it observes the US and other western nations in disarray as a result of the outbreak. Beijing says Washington is itching for a new cold war, and suggests it should be careful what it wishes for.

If any country rebukes or displeases China these days, trade threats and scorn quickly come their way. The old China approach of “hide your strength and bide your time” has been shelved.

Beijing appears to feel that now is its time, it is quite happy to show its strength, and it is not too concerned about ruffling feathers along the way.