US ends waivers for certain countries to purchase Iran’s oil 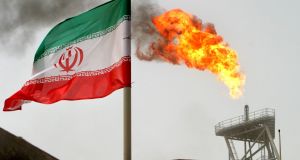 A gas flare on an oil production platform beside a national flag in Iran: exports have fallen to a million barrels per day. Photograph: Raheb Homavandi

Saudi Arabia and Abu Dhabi expect to benefit from the Trump administration’s decision to end waivers that permit key consumers – among them India, China, South Korea, Japan and Turkey – to buy Iranian oil.

US president Donald Trump tweeted, “Saudi Arabia and others in OPEC [the Organisation of Petroleum Exporting Countries] will more than make up the Oil Flow difference in our now Full Sanctions on Iranian Oil.” His aim is to weaken the Iranian government domestically and force it to curb its involvement in regional affairs.

Trump also warned Iran not to heed pledges by Democratic presidential candidates running in the 2020 race that, if elected, they would end sanctions.

When, in May 2018, Trump pulled out of the nuclear deal providing for the dismantling of Iran’s nuclear programme in exchange for sanctions relief, eight countries were granted waivers allowing them to purchase Iranian oil. China, India, Japan, South Korea and Turkey now face US financial penalties if they buy Iranian oil beyond May 2nd.

Under US pressure, Greece, Italy and Taiwan have done Washington’s bidding by achieving zero Iranian imports.

India, which buys 18 per cent of its oil from Iran, and Japan (5 per cent) have sought other sources. South Korea has not found a supply to match the quality and price of Iranian oil and has asked for an extension of its waiver.

Turkish foreign minister Mevlut Cavusoglu said: “The US decision to end sanctions waivers on Iran oil imports will not serve regional peace and stability [and will] harm Iranian people.” He said Turkey also rejected “unilateral sanctions and impositions on how to conduct relations with neighbours”.

Iran’s neighbours Afghanistan and Iraq, which depend on Tehran for oil products and natural gas, are treated as special cases. Last month, Washington granted Baghdad another 90-day waiver covering imports of Iranian electricity and gas and is expected to treat Kabul similarly.

The US is, however, pressing Riyadh to provide Iraq with energy and other imports to replace purchases from Tehran, which supplies Iraq with 40 per cent of its needs and is a close ally of the Shia fundamentalist Iraqi government.

More than 100 Iranian firms are operating in Iraq. Last year trade was valued at $12 billion (€10.7 billion) and revenue from pilgrimage to Shia holy sites $5 billion.

By cancelling waivers, the US hopes to force Iran, which is already struggling with the punitive sanctions regime, to capitulate to a dozen US demands.

These include ending all uranium enrichment and ballistic missile development, permitting access to UN nuclear inspectors to all sites within the country, halting support for Hizbullah and Hamas, and withdrawing all Iranian forces from Syria. Iran is unlikely to comply.