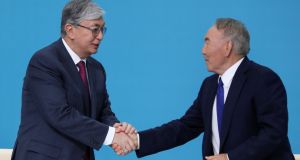 Nur Otan delegates voted overwhelmingly in favour of Mr Tokayev’s candidacy at the bidding of Nursultan Nazarbayev, the founding president of independent Kazakhstan, who resigned last month after leading the central Asian country for almost 30 years.

“I ask everyone to support his candidacy,” Mr Nazarbayev said at a pre-election party congress on Tuesday in the Kazakh capital Nur-Sultan – formerly Astana – which was renamed in his honour after he stepped down on March 19th. “I consider him the most worthy candidate for this high post.”

Kazakhstan has never held an election judged free and fair by international observers and, as the candidate for Nur Otan, by far the country’s biggest political party, Mr Tokayev is almost certain to win the vote on June 9th. However, he will rule in the shadow of Mr Nazarbayev, who holds the honorary title of Elbas – or national leader – and has retained various key posts including chairmanship of Nur Otan and Kazakhstan’s national security council to ensure an orderly transition of power.

Thanking Mr Nazarbayev for his support on Tuesday, Mr Tokayev said it would be an “honour and a blessing” to follow the strategic course set by the first president of Kazakhstan who had transformed the impoverished former Soviet republic into a flourishing independent state.

Mr Tokayev, who was serving as head of the Kazakh senate before becoming interim president last month, has long been seen as a potential successor to Mr Nazarbayev, although not the only candidate for the job. Many Kazakhs were convinced that Mr Nazarbayev would eventually entrust the presidency to a family member – his nephew Samat Abish, who sits on the security council, or his daughter Dariga Nazarbayeva, the new head of the Senate.

Mr Nazarbayev’s resignation has prompted a rare outbreak of protests over the lack of political freedoms in Kazakhstan and may have persuaded the authorities to call a snap election and decide the succession question for good.

Who will challenge Mr Tokayev at the ballot is not yet clear. But addressing Nur Otan on Tuesday, Mr Nazarbayev urged deputies to use modern information technology to reach out during the election campaign and convince all voters to “make the correct choice”.

Critics of the government said Mr Tokayev’s nomination meant the election was already decided and the vote would be a sham.

“Everyone who hoped for an honest election, for changes in the country – forget it,” said Sergei Duvanov, a prominent journalist and opposition activist in Kazakhstan, “The election has finished before it began. The second [president] will become the third and the first will continue to rule the country . . . As for life in the country everything will remain the same,” he wrote on Facebook.