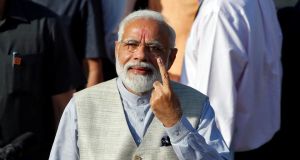 India’s prime minister Narendra Modi shows his ink-marked finger after casting his vote outside a polling station during the third phase of general election in Ahmedabad, India on April 23rd. Photograph: Amit Dave/Reuters

Millions of Indians voted on Tuesday in the third and largest phase of the country’s staggered general election, in which prime minister Narendra Modi’s Hindu nationalist Bharatiya Janata Party (BJP) is seeking to return to power by promising a robust national security policy.

Nearly 60 per cent of some 188 million eligible voters, including Mr Modi himself, had cast their ballot up to early evening for 116 parliamentary seats across the country. Since early April voting has concluded in 302 of all 543 Lok Sabha (elected lower house) seats.

The remaining four rounds of polling for 241 constituencies will end on May 19th, and results will be announced four days later.

“An improvised explosive device or IED is a weapon of terrorism, but a voter ID is a weapon of democracy,” said Mr Modi after voting in his western home state of Gujarat.

'Vote Modi for PM if you want to destroy the breed of Muslims,' said senior BJP leader Ranjeet Bahadur Srivastava

“India is no longer scared of Pakistan’s [nuclear] threatsat Barmer, in western Rajasthan state, adjoining the Pakistani border. “We too have nuclear weapons; are we saving them for Diwali [festival].”

The comments came just weeks after military tension between India and Pakistan escalated after their respective air forces executed bombing raids in each other’s country and engaged in aerial combat.

This, in turn, triggered an exchange of daily artillery, mortar and small arms fire between the respective armies across the line of control that divides the disputed Himalayan Kashmir region between the nuclear-armed neighbours.

After both countries conducted tit-for-tat nuclear tests in May 1998, India adopted a no-first-use policy with regard to its strategic weapons arsenal, which it claimed was exclusively deterrent in nature.

The BJP has also displayed an anti-Muslim bias in its election campaigning, with one senior party leader declaring that over the past five years Mr Modi had “made attempts to break the morale of the Muslims”.

“Vote Modi for PM if you want to destroy the breed of Muslims,” said senior BJP leader Ranjeet Bahadur Srivastava at a public rally at Barabanki in India’s most populous northern Uttar Pradesh state, which elects 80 MPs.

He said that once the BJP had won it would bring “machines” from China to shave thousands of Muslims of their facial hair and force them to adopt Hinduism.

Muslims comprise some 16 per cent of India’s population of 1.3 billion, with more than 80 per cent Hindus, whom the BJP claims to represent and champion.

According to a recent report by the New York-based Human Rights Watch, at least 44 people, 36 of them Muslims, were killed by Hindu vigilante mobs between May 2015 and the end of 2018 in a bid to protect cows that Hindus consider sacred.

“Calls for cow protection may have started out as a way to attract Hindu votes, but it has transformed into a free pass for mobs to violently attack and kill minority group [Muslim] members,” said Human Rights Watch South Asia head Meenakshi Ganguly.

Other analysts said that if the BJP’s 2014 election campaign was marked by hope, aspiration and the promise of change, its 2019 counterpart has been angry and polarising.