Analysis: Washington offer is not even-handed and invites Saudis to expand offensive 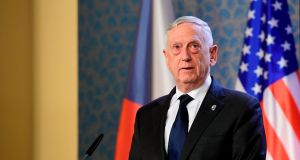 US secretary of defence James Mattis: envisages continuing Saudi air raids on Yemen in the next 30 days. Photograph: AFP/Getty Images

The US call for a ceasefire in Yemen will not bring an abrupt halt to the deadly and devastating 3½-year conflict in the region’s poorest country.

Three-quarters of the 22 million Yemenis survive on international aid and 14 million are on the brink of famine due to the disruption of food supplies by fighting and the partial blockade imposed by Saudi Arabia and its ally, the United Arab Emirates.

Defence secretary James Mattis and secretary of state Mike Pompeo urged Houthi rebels to pull back from the Saudi and Emirati borders and halt drone and missile strikes on these countries. Subsequently, the Saudis would end aerial bombing of Yemen’s urban areas, although 65 per cent of Yemenis live in the countryside.

This is not an even-handed approach. There is no demand for both sides to undertake a ceasefire with troops remaining in place. Instead, the Houthis are asked to end their only means of deterring Saudi and Emirati military action while the Saudis are required to halt specific air strikes.

Mattis envisages continuing Saudi air raids. Over the next 30 days “the US goal”, he said, “is to achieve a level of capability by those forces fighting against the Houthis, that they are not killing innocent people”. The UN stopped counting fatalities two years ago but the latest figure cited by independent sources is 57,000.

Riyadh and Abu Dhabi seek to drive the rebels from the port and seize incoming food and medical supplies. Since most Yemenis live in the west and north under Houthi rule, the rebels would be compelled to surrender. But if they hold out, they would be victorious despite massive suffering.

Combatants are asked to meet in Sweden where UN envoy Martin Griffiths would conduct “substantive negotiations” to end the war. Pompeo said talks should produce “confidence-building measures to address the underlying issues of the conflict, the demilitarisation of borders and the concentration of all large weapons under international observation”. Unless both sides agree to the second and third demands, the Houthis are certain to reject them.

The US has promoted negotiations on the basis of UN Security Council resolution 2216 which calls for Houthi withdrawal from all areas they have captured and surrender of heavy weapons. The resolution has been rejected by the Houthis and would be an obstacle to any deal.

Key to a solution is the fate of Abed Rabbo Mansour Hadi, the Saudi-sponsored president of Yemen. He resides in Riyadh and has little support in Yemen. He became transitional president in February 2012 in an uncontested election. His term was to last two years but was extended for a third.

Consequently, he has been president without a mandate since January 2015, when he was compelled to resign by Houthi-led protests against a plan to decentralise Yemen’s governance. In March 2015, he fled to Saudi Arabia.

Residents of the north and west feared decentralisation would deepen poverty in their regions as the oil fields, the country’s sole resource, are located in the southern Hadramut and Saba provinces where revenues would remain.

The Saudis and Emiratis launched the war on Yemen on March 25th, 2015, arguing the Houthis are Iranian proxies, a claim refuted by Gulf experts, including the BBC’s Frank Gardner, who said on Wednesday that at most Iran and its ally, Lebanon’s Hizbullah, provide some military advisers to the Houthis.