Conditions ‘not yet conducive’ for return of Rohingya, says UNHCR 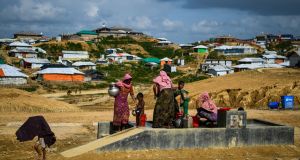 UN officials have condemned a deal struck between Myanmar and Bangladesh to start repatriating Rohingya refugees, with the UN refugee agency confirming they have not been consulted about the plan.

Bangladesh and Myanmar government officials announced this week they had struck a “very concrete” repatriation deal for the return of the 720,000 Rohingya refugees who fled a brutal military crackdown in August 2017, which would begin by “mid-November”.

Myanmar officials said on Wednesday they had verified 5,000 Rohingya refugees so far, with the “first batch” of 2,000 to be repatriated in the next month.

However, Stephane Dujarric, a spokesman for the UN secretary general, Antonio Guterres, said the deal had taken the UN high commissioner for refugees (UNHCR) by surprise.

“To be clear, UNHCR, which is in lead on the issues of refugees, was not consulted on this matter,” said Mr Dujarric at the daily press briefing given by the secretary general’s office.

Chris Melzer, the UNHCR’s senior external officer based in Cox’s Bazar, Bangladesh, reiterated this, saying: “UNHCR was not a party to that agreement.

“We would advise against imposing any timetable or target figures for repatriation in respect of the voluntary nature and sustainability of return,” added Mr Melzer. “It is unclear if refugees know their names are on this list that has been cleared by Myanmar. They need to be informed. They also need to be consulted if they are willing to return . . . It is critical that returns are not rushed or premature.”

Hundreds of thousands of Rohingya have been living in cramped refugee camps in Cox’s Bazar for more than a year after fleeing rape, murder and arson in Rakhine state at the hands of the Myanmar military.

The Myanmar government signed an agreement with the UNHCR in June that they would work with the UN to create “safe and dignified” conditions for the return of the Rohingya to Rakhine, including guaranteeing security, freedom of movement and pathway to citizenship. None of these assurances have been made by the Myanmar government so far and the UNHCR has only been given restricted access to Rakhine state.

“For UNHCR, the conditions in Rakhine state are not yet conducive for a return to Myanmar,” said Mr Dujarric. “And, at the same time, we’re seeing Rohingya refugees continue to arrive from Rakhine state into [Bangladesh], which should give you an indication of the situation on the ground.”

Bangladesh has handed Myanmar a list of 24,342 refugees whom they have cleared for repatriation, but details of the logistics and precise date of the repatriation are unclear. The issue of consent and possible forced repatriation has also been raised, with Rohingya in Cox’s Bazar saying they were fearful of going back and had never been asked whether they wanted to return.

Myanmar officials, including Myint Thu, the permanent secretary at Myanmar’s ministry of foreign affairs, visited the camps in Cox’s Bazar on Wednesday and were greeted by hundreds of Rohingya protesters who held placards demanding citizenship and security. “We are here to meet with the people from the camps so that I can explain what we have prepared for their return and then I can listen to their voices,” said Myint Thu.

Safiullah, who like many other Rohingya uses one name, was among the refugees who met the Burmese members of the Bangladesh-Myanmar joint working group at Kutupalong refugee camp on Wednesday.

“The Burmese officials said to us that around 4,600 Rohingya refugees would be taken to Myanmar,” said Safiullah. “The first bunch, around 2,300, would be allowed to return now. The remaining half would return at a later stage, they told me. The returnees have to spend three days in a transit camp inside Rakhine before they are taken to another camp which will be their new home.”

He had asked whether the Rohingya would be able to return to their own villages and get back their confiscated land and other properties but “the Burmese officials did not give me an answer”.

“I will not return to Myanmar even if the authorities enlist me for repatriation. I am sure this is the view of almost all Rohingya refugees in Bangladesh,” he said.

Some observers have described the announcement as politically motivated by the prime minister of Bangladesh, Sheikh Hasina, ahead of the general election which will be held at the end of December. While Bangladesh initially welcomed the refugees fleeing the military crackdown, a year on their presence has become a politically contentious issue, and there is increasing pressure on Ms Hasina to start their repatriation as soon as possible. – Guardian