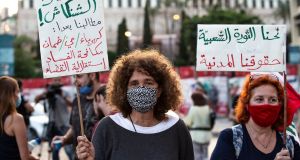 Protesters in face masks hold up placards with messages rejecting a new civil conflict during an anti-government rally in front of the government palace in Beirut, Lebanon, at the weekend. Photograph: Nabil Mounzer/EPA

Lebanon needs emergency aid and urgent reforms to rescue its citizens from the country’s worst economic, political and social disaster, according to the International Crisis Group think tank.

“The economic crisis is without precedent in the country’s history,” the Brussels-based organisation said, urging the government to speed up negotiations with the International Monetary Fund (IMF) and international donors to secure funding to halt the country’s downward slide.

Lebanon is seeking $9 billion (€7.9 billion) from the IMF and $11 billion in grants and loans pledged by international donors at a conference in Paris in 2018 on condition that major reforms – including tackling corruption and mismanagement – are enacted. So far these conditions have not been met.

Until the economic crisis abates, the Crisis Group has called for humanitarian assistance to rescue struggling families, as 45 per cent of Lebanese live in poverty.

As the heavily indebted country’s currency plunged in value, imports shrank, prices rose, businesses closed and tens of thousands suffered cuts in salaries or lost jobs. The emergence of Covid-19 in March not only accelerated economic meltdown but also coincided with Lebanon’s first ever default on a eurobond payment.

Tensions have been fanned by the return to the streets of protesters calling for the ousting of the political elite and overthrow of the country’s sectarian political system, which is blamed for the current catastrophe as well as two civil wars.

The Crisis Group argued that there must be “structural change [that] will put an end to the political model in which corrupt and self-serving cliques appropriate and redistribute state resources and public goods”.

However, the group questioned whether the elite would “oversee a transition” which would involve “pulling out the rug from their own feet”.

Clashes erupted on Saturday during a demonstration in central Beirut when supporters of the Shia Hizbullah and Amal movements, who support the status quo, attacked participants and denigrated Aisha, the wife of the Prophet Muhammad.

At the same time, right-wing Maronite Christian activists demanded Hizbullah’s disarmament. After video of the melee circulated, shooting broke out elsewhere. At least 48 protesters and 25 soldiers were injured.

President Michel Aoun warned on Tuesday that “sectarian strife aims at striking the basis of Lebanon’s existence”, which is founded on the disputed power-sharing sectarian partnership.

Prime minister Hassan Diab called Saturday’s events an “alarm bell” and said “all Lebanese would pay the price of any stability setback, not just a single group or region”. Interior minister Mohamed Fahmi said the disruptions and insults that triggered clashes were “intentional and premeditated”.

Arab and western diplomats called for “stability and calm”. In Cairo, al-Azhar, the world’s highest Sunni religious authority, denounced the insults to Aisha and urged Muslims to respect each other.