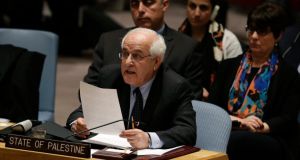 Palestine’s permanent observer to the United Nations, Riyad Mansour, speaks at a UN Security Council meeting on a resolution to establish a Palestinian state. The resolution was defeated. Photograph: Peter Foley/EPA

The UN Security Council rejected a Palestinian resolution calling for an Israeli withdrawal from the occupied West Bank and East Jerusalem and the establishment of a Palestinian state by late 2017.

The resolution called for negotiations based on territorial lines that existed before Israel captured the West Bank, East Jerusalem and the Gaza Strip in the 1967 Six-Day war. It also called for a peace deal within 12 months.

Even if the draft had received the minimum nine votes in favour, it would have been defeated by Washington’s vote against it. The United States is one of the five veto-wielding permanent members of the council.

There were eight votes in favour of the resolution, including France, Russia and China, two against and five abstentions, among them Britain. Australia joined the United States in voting against the measure.

US ambassador to the United Nations Samantha Power defended Washington’s position in a speech to the 15-nation council by saying it was not a vote against peace between Israel and the Palestinians.

“The United States every day searches for new ways to take constructive steps to support the parties in making progress toward achieving a negotiated settlement,” she said. “The Security Council resolution put before us today is not one of those constructive steps.”

Ms Power said the text was “deeply imbalanced” and contained “unconstructive deadlines that take no account of Israel’s legitimate security concerns.” She also said the text “was put to a vote without a discussion or due consideration among council members.”

Jordanian ambassador Dina Kawar, the sole Arab representative on the council, expressed regret that the resolution was voted down. She also said that she thought council members should have had more time to discuss the proposal.

The defeat of the resolution was not surprising. According to council diplomats, Washington had made it clear that it did not want such a resolution put to a vote before Israel’s election in March.

The European and African camps were split in the vote. France and Luxembourg voted in favour of the resolution while Britain and Lithuania abstained. Among the African nations, Chad voted yes while Rwanda and Nigeria abstained.

The Palestinians, frustrated by the lack of progress in peace talks, have sought to internationalise the issue by seeking UN membership and recognition of statehood via membership in international organisations.

Palestinian observer Riyad Mansour thanked delegations that voted for the resolution, noting that lawmakers in a number of European countries have called for recognition of Palestine. He said it was time to end the “abhorrent Israeli occupation and impunity that has brought our people so much suffering.”

Palestinians have also threatened to join the International Criminal Court, which they could then use as a forum to push for war crimes proceedings against Israel.

In a brief statement, Israeli delegate Israel Nitzan said the Palestinians have found every possible opportunity to avoid direct negotiations and brought the council “a preposterous unilateral proposal”.

“I have news for the Palestinians - you cannot agitate and provoke your way to a state,” he said.

An earlier Palestinian draft called for Jerusalem to be the shared capital of Israel and a Palestinian state. The draft that was voted on reverted to a harder line, stating that East Jerusalem would be Palestine’s capital and calling for an end to Israeli settlement building.

The Israeli government had said that a Security Council vote, following the collapse in April of US-brokered talks on Palestinian statehood, would only deepen the conflict.

Israel, which pulled troops and settlers out of the Gaza Strip in 2005, has said its eastern border would be indefensible if it withdrew completely from the West Bank.