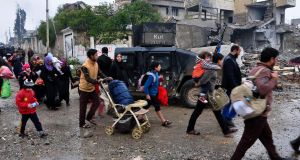 Civilians evacuate the area as the Iraqi counter-terrorism service advances towards the Yabasat neighbourhood of Mosul on March Thursday during the ongoing offensive to push Islamic State jihadists out of the city. Photograph: Ahmad al-Rubaye/AFP/Getty Images

About 400,000 Iraqi civilians are trapped in the Islamic State-held Old City of western Mosul, short of food and basic needs as the battle between the militants and government forces rages around them, the United Nations refugee agency said on Thursday.

Many fear fleeing because of Islamic State snipers and landmines. But 157,000 have reached a reception and transit centre outside Mosul since the government offensive on the city’s west side began a month ago, said Bruno Geddo, the UN High Commissioner for Refugees (UNHCR) representative in Iraq.

“The worst is yet to come. Because 400,000 people trapped in the Old City in that situation of panic and penury may inevitably lead to the cork-popping somewhere, sometime, presenting us with a fresh outflow of large-scale proportions,” he said.

Mosul, Iraq’s third-largest city, was captured by the Islamic State terror group, also known as Isis or Daesh, in June 2014. An operation to retake it, led by the Iraqi government with the support of allies including the US, has been under way since October.

Fighting in the past week has focused on the Old City, with government forces reaching as close as 500m to the al-Nuri Mosque, from where Islamic State leader Abu Bakr al-Baghdadi declared a caliphate spanning parts of Iraq and Syria in June 2014.

The hardline militants are now on the back foot, with their stronghold in Syria also under attack. But they still hold an estimated 40 per cent of western Mosul and the campaign to recapture it could yet take weeks.

The government halted offensive operations on Thursday morning due to cloudy weather, which makes it difficult to bring in air support. Later, federal police reinforcements moved towards the Old City and the troops were preparing to storm the area and retake the mosque, a police spokesman said.

“Dozens of Daesh snipers are still positioned on rooftops of the Old City high buildings, posing a threat to our soldiers,” he said.

“We are waiting for the weather to improve so air strikes can compromise Daesh snipers and pave the way for the imminent advance and minimise casualties among our troops.”

A police sergeant named Mohamed, sheltering in an empty villa about 300m from the line as sporadic mortar and sniper fire came for Islamic State positions, said: “They are using everything against now”.

Waleed, a displaced man from a district on the edge of the Old City, joined other mud-splattered families being loaded on to trucks for transport to camps. “Everyone is hungry, there is no food and people are starving. We left last night when the army opened a way for us,” he told Reuters.

Mr Geddo, of the UNHCR, speaking at Hamman al-Alil, 20km south of Mosul, said the number of civilians streaming out was increasing and an average 8,000-12,000 per day had reached the displaced persons facility.

“We also heard stories of people running away under the cover of early morning fog, running away at night, of trying to run away at prayer time when the vigilance at Isis checkpoints is lower,” he said, in remarks made public from Geneva.

Food, fuel and electricity are scarce in the Old City.

“People have started to burn furniture, old clothes, plastic, anything they can burn to keep warm at night, because it is still raining heavily and the temperatures at night in particular drop significantly,” Mr Geddo said, adding that more people could be expected to flee.

“The more you go without food, the more you become panicked and the more you want to run away. At the same time it [the outflow] is increasing because the security forces are advancing and therefore more people are in a position to run away where the risk is likely more mitigated.”

With the battle for Mosul, Islamic State’s last major stronghold in Iraq, now in in its sixth month, Iraqi forces backed by the US-led coalition, air strikes and advisers now control the east side and more than half of the west.

Baghdadi and other Islamic State leaders are believed to have left the city, but Isis fighters are resisting with snipers hiding among the population, and using car bombs and suicide trucks to smash into Iraqi positions. US officials estimate about 2,000 fighters remain inside the city.