British Prime Minister Theresa May vows to move forward following a deadly attack in London, saying the country will never give in to terror. Video: Reuters 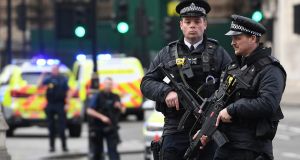 Armed police outside parliament on Wednesday. Scotland Yard said police were called to a firearms incident in the Westminster grounds and on Westminster Bridge. Photograph: Andy Rain/EPA

As Theresa May convened a meeting of her emergency Cobra group on Wednesday night, the first question Britain’s security service was asking about the alleged assailant was: do we know him? If he was known to them, security officials would try to establish if he was part of a network and move quickly to either shut it down or put it under close surveillance.

“If they know who he is and he did something, they failed. But at the same time, if they didn’t know who he is, then it’s even worse because then they’ve completely failed,” Rafaello Pantucci, director of international security studies at the Royal Institute for Security Studies, told The Irish Times.

“At least if they had some awareness of the person, if it’s someone on their radar, then they can say, okay, our process of managing the information has failed rather than our information collection.”

Britain’s security service has been on a “severe” alert level for almost three years, which means that a terrorist attack was “highly likely”. Although the number of large-scale Islamist-inspired attacks in Europe has diminished in recent months, there were two incidents in France during a single weekend last week.

The Metropolitan Police said on Wednesday that they had an open mind about the motivation for the attack at Westminster, although they were treating it as a terrorist incident. The fact that it happened on the anniversary of last year’s coordinated bombings in Brussels has heightened suspicions that it may have been inspired by the so-called Islamic State.

Most recent attacks in Europe have been on relatively soft targets such as the Bataclan nightclub in Paris, venues which are difficult to protect or even to identify as likely targets. Wednesday’s attack in London was not only on one of Britain’s most important and high-profile institutions, but one of its most heavily guarded.

Security at Westminster will almost certainly be reviewed, but Mr Pantucci said that, if the attack was as low-tech as reports suggest, it would have been difficult to prevent.

“So far, we’ve heard reference to knives and cars being used, both of which are fairly common household items,” he said. “So frankly speaking, if that’s what they used, then it’s very difficult to look at it from the equipment perspective and think about how you’re going to prevent something like this.”

Shortly after the attacks, police threw a wide cordon around the Palace of Westminster, closed the Thames from Vauxhall Bridge to Embankment, and suspended rides on the London Eye across the river.

The authorities’ greatest fear was that the Westminster attack could be the first of a number of co-ordinated incidents around London.

“Terrorist groups like to launch multiple attacks at the same time because it has a far more dramatic effect,” Mr Pantucci said. “So the immediate concern is to ensure that you have an adequate understanding of what you’re looking at and an understanding of what other things might happen.”