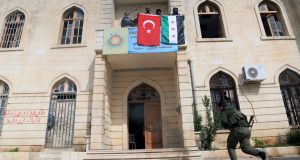 The Turkish military and allied Syrian forces have taken “total” control of the town centre of Afrin, the target of an offensive against the Kurdish militia.

President Recep Tayyip Erdogan said the Turkish flag and the flag of the Syrian opposition fighters had been raised in the town, previously controlled by the Kurdish militia known as the People’s Protection Units, or YPG.

“Many of the terrorists had turned tail and run away already,” Mr Erdogan said in a speech in western Turkey.

Turkey views the Kurdish forces in the Afrin enclave along the border as terrorists linked to the outlawed Kurdistan Workers’ Party, or PKK, which has waged a decades-long insurgency within Turkey’s borders.

Ankara launched the operation, codenamed Olive Branch, against the town and surrounding areas on January 20th, slowly squeezing the militia and hundreds of thousands of civilians into the town centre.

A Kurdish official, Hadia Yousef, said the YPG was still fighting inside the town, but had evacuated the remaining civilians because of “massacres”.

But Salih Muslim, a senior Kurdish official living in exile in Europe, tweeted that Kurdish fighters had withdrawn, saying “the struggle will continue and the Kurdish people will keep defending themselves”.

Syrian State TV on Sunday broadcast footage of a long line of vehicles and civilians on foot leaving Afrin. – AP