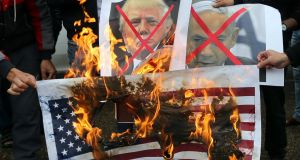 Palestinians burn posters depicting Israeli prime minister Binyamin Netanyahu and US pesident Donald Trump during a protest against the US intention to recognise the city of Jerusalem as the capital of Israel, in Rafah in the southern Gaza Strip on Wednesday. Photograph: Ibraheem Abu Mustafa/Reuters

Donald Trump’s decision to recognise Jerusalem as Israel’s capital and launch the process of shifting the US embassy to there from Tel Aviv, has stoked fears among Arab, Muslim, Christian and European leaders of a violent backlash over his break with the 70-year-old global policy of regarding Jerusalem as a disputed city.

Arab leaders with close ties to the US will lose credibility as they have been un- able to convince Trump to change his mind over Jerusalem. His stance is particularly embarassing for Saudi king Salman and crown prince Mohammed bin Salman, who warmly welcomed Trump to Riyadh last spring and hosted an Arab-Muslim jamboree with the aim of cultivating his support of Saudi leadership.

Arab and Muslim leaders could be vulnerable to attack if they do nothing to counter Trump’s move. Palestinian and Jordanian calls for emergency meetings of the Arab League and Organisation of Islamic Co-operation will not assuage Arab and Muslim anger. Both bodies are widely seen as toothless talking shops.

If Arab and Muslim governments fail to take credible, concrete action against the US, radicals attached to the al-Qaeda and Islamic State terror groups could step up attacks against foreign military and civilian objectives. Israeli and US embassies, citizens of these countries and US interests could top the list of targets.

Smarting from defeats in Raqqa and Mosul, Islamic State fighters who escaped the battlefields of Syria and Iraq and infiltrated or returned to European countries could mount operations in urban centres crowded with Christmas shoppers and revellers.

Although the Arab world is plagued by warfare in Syria, Iraq, Yemen, and Egypt, its leaders dare not ignore Palestine. It remains the core pan-Arab nationalist cause and the struggle over Jerusalem has repeatedly triggered Palestinian violence against Israel.

A feeling among Palestinian Muslims and Christians that they have lost Jerusalem – seen by them as their religious, national and cultural capital – could lead to a fresh uprising more violent than the second intifada sparked by the 2000 election campaign visit of Israel’s Ariel Sharon to the mosque compound in Jerusalem, regarded by Israelis as the site of ancient Jewish temples.

Trump’s overthrow of the Jerusalem status quo has deepened burgeoning Palestinian anger over a peace plan – unacceptable to Palestinians and Arabs – to be proposed by his son- in-law, Jared Kushner. The plan would involve the creation of a Palestinian state consisting of non-contiguous enclaves in the West Bank with Abu Dis, a West Bank village near Jerusalem, as its capital.

Muslims the world over are bound to reject and resent Trump’s action on Jerusalem. They have been repeatedly insulted and angered by Trump’s pronouncements and policies, which they see as manifestations of prejudice and discrimination against them.

His decision on Jerusalem coincides with the re-enforcement of the ban against the entry into the US of citizens from six Muslim countries. This travel ban was among the first decrees issued by Trump after taking office and was activated a week after his inauguration.