Cambodia: ‘In our culture, it’s considered too easy to say sorry’ 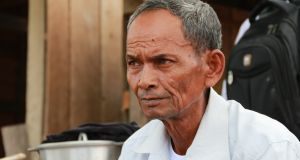 In Anlong Veng in northern Cambodia, the conversation turns to food.

“But what did you get to eat?” 14-year-old schoolgirl Thy Daly asks Huoy Teng (62) and Mon Mao (64), who survived the murderous Khmer Rouge regime in the 1970s. Very little, is the answer.

“Back then I was so hungry I’d go to the rice paddy and pick a few grains and roast them, unhusked. I would have eaten anything,” Teng explains to the group comprising schoolchildren and student teachers. “I had a makeshift torch and went around at night with my siblings to catch toads.”

“I was so skinny,” says Mao, “that you could see my knee bones sticking out.”

The two quiet-spoken men, who were civil parties to the UN-backed tribunal to prosecute Khmer Rouge leaders, have travelled from their village in Chong Kal district to Anlong Veng to share their experiences with young people born long after the atrocities of the regime.

“Some people don’t believe our story, especially young people,” Teng tells the group. “Some dismiss it as a fairy tale. But you must believe that it happened. It is true.”

From 1975 to 1979, under the leadership of Pol Pot, the communist Khmer Rouge regime oversaw the killing by torture, hard labour and starvation of some two million people in Cambodia.

Teng and Mao were forced to work constructing dams and building the irrigation system that the Khmer Rouge viewed as vital to expand rice production. “The senior leaders of the Khmer Rouge are to blame,” says Mao. “If there was a death sentence, we would like them to receive it.”

Teng adds: “But the smaller cadres, the soldiers were not at fault. Please don’t discriminate against them. They are not to blame for their leaders’ acts.”

This visit to Anlong Veng, the final stronghold of the remnants of the Khmer Rouge before it integrated into the Cambodian state in 1998, has a dual purpose: the two men will also meet some of those ex-cadre members who now live quiet lives of retirement in the district.

The initiative is part of the work of the Documentation Centre of Cambodia (DC-Cam), whose founder Youk Chhang, himself a survivor of the regime, gathered some one million documents, films and photographs from the period, many of which have served as evidence in the tribunal.

The centre helped introduce the study of the Khmer Rouge period into secondary schools in 2009, and runs a peace centre and museum in Anlong Veng. It has elaborate plans for the area, including the opening of an educational tourist trail that includes, among other stops, the grave of Pol Pot, the home of Ta Mok, known as his “butcher”, and the peace centre.

“Some nine million people had already left school by 2009, so in a country of 16 million there’s still a lot of people who don’t know their own history of past abuse,” Chhang explains in his Phnom Penh office. “There is a risk of it being repeated. People can know what happened by looking at social media, for example. But to understand you need to really educate people. Not just for memory but for healing, for reconciliation – to reconnect the broken pieces within us.”

It is in that spirit that Huoy Teng and Mon Mao travel with the students some 30km to Andong Bey, a struggling, dusty town with many boarded-up houses. “So many people have left to work in Thailand due to problems with micro-financing,” explains Phat Bora (22) of DC-Cam. “They borrowed money and now the prices of the crops went down, so they went across the border to work as labourers to try to pay the debt.”

Tron Kron (73) and her husband Nov Chuoo (72) have had no such problems. We find them at home with their daughter and grandchildren, Kron lounging in an army-design hammock, one hand attached to a drip suspended overhead. Teng approaches them and places his hands in prayer position as a mark of respect. The couple, both of whom were Khmer Rouge foot soldiers in Kampong Thom province, greet us, and Teng, who has not met them before, sits as though joining friends.

“You were separated into ‘new’ and ‘old’ people,” Chuoo explains to the students, glancing at Teng every so often as though for confirmation that what he is saying is true. It was clearly preferable to be in the “old” category; “new” people weren’t trusted and were often executed ahead of others.

“There was this killing site called the ‘well farm’. They would kill people beside a well – usually by beating them – and then throw them into the well,” Chuoo tells the students.

“Yes, I witnessed people being taken to the well and bludgeoned with farming tools,” says Teng, nodding. “And when the bodies began to rot, they added more.”

“Yes, people were taken by the truckload to be killed that way,” says Kron. “There were only a few executioners, but there were quite a lot of people.”

Didn’t it poison the water supply? “Water was never a problem due to the irrigation system,” says Bora.

It is a surreal experience to witness a conversation filled with such horrific detail, held in such calm terms, and by someone who suffered the atrocities being spoken about at the hands of people including his interlocutor. There are no dramatic gestures, no clearing the air, no apologies.

“In our culture, it’s considered too easy to say sorry,” says DC-Cam’s Ly Sok Kheang, director of the Anlong Peace Centre. “Cambodian people prefer to say let bygones be bygones. Let him or her face their karmic acts. Saying sorry is not workable.”

Anlong Veng was the final stronghold of the Khmer Rouge, and is now a kind of retirement district for former cadre members. The ideology, however, has not gone away. Many people here still revere Ta Mok, known as Pol Pot’s “butcher”. There is a Khmer Rouge “mindset”, says Kheang, “that makes it difficult to align ideologies. They tend to stick to their own group, so it’s difficult to integrate the communities.”

Emma Leslie, director of the Centre for Peace and Conflict Studies, which held its annual Peace Practitioners’ Research Conference in Siem Reap last month, says the big challenge lies in educating Cambodia’s young people and equipping them with the information and skills to lead the country in the future. The centre, which runs a master’s programme, will open a peace museum in Battambang next year.

“Seventy per cent of the population is under 30. You have all these young people and not an education system that has critical thinking, also that doesn’t really deal with history.”

Reconciliation shouldn’t be only about the Khmer Rouge, says Leslie. She is unconvinced of the merits of the UN tribunal. “As a model it was useful for collecting information, but not for reconciliation, and certainly not for justice.”

Second article in a series of three. Tuesday: Press freedom under threat.