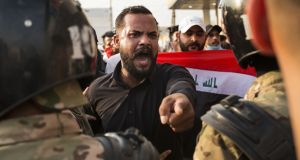 An Iraqi protestor gestures in front of security forces during a demonstration against state corruption, failing public services and unemployment, on Wednesday in the southern city of Basra. Photograph: Getty Images

Domestic instability coupled with regional tensions could prove to be the final nail in the coffin of Mr Abdul Mahdi’s fragile coalition government, sworn in last year as a compromise between rival factions after an inconclusive election.

The protests, which started on Tuesday over unemployment, corruption, and poor public services, have escalated, with many chanting for the “fall of the regime”, a slogan first popularised during the 2011 Arab Spring uprisings.

“We are demanding a change, we want the downfall of the whole government,” said one protester in Baghdad who declined to identify himself for fear of reprisal.

An interior ministry spokesman said one child was killed on Wednesday when a protester threw a bottle filled with gasoline at a vehicle carrying civilian passengers in Zafaraniya district of southeast Baghdad.

A protester was shot dead in the southern city of Nassiriya when police opened fire to disperse demonstrators, local health sources told Reuters. Another protester died of their wounds, police and health sources said.

Police and the army opened fire and launched tear gas canisters to disperse hundreds of protesters all over Baghdad.

Protests also erupted all over southern Iraq – heartland of the Shia Muslim majority who, after years of voting along sectarian lines, are turning on their political leaders for failing to deliver jobs and basic services.

Small protests also took place in the northern cities of Kirkuk and Tikrit, as well as the eastern province of Diyala.

Mr Abdul Mahdi on Wednesday chaired an emergency meeting of the national security council, which later issued a statement regretting deaths on injuries on both sides during Tuesday’s protests and affirming the right to protest and freedom of expression. It made no mention of Wednesday’s protests.

“The council affirms the right to protest, freedom of expression, and the protesters’ legitimate demands, but at the same time condemns the acts of vandalism that accompanied the protests,” it said.

Appropriate measures to protect citizens, public, and private property would be taken, it added.

Security forces blocked several roads in Baghdad, including a bridge that leads to the fortified Green Zone, which houses government buildings and foreign embassies, as part of tightened security measures, a security source said.

“Our demands? We want work, we want to work. If they do not want to treat us as Iraqis, then tell us we are not Iraqi and we will find other nationalities and migrate to other countries,” said one protester in eastern Baghdad.

In a bid to cool tempers, Mr Abdul Mahdi on Tuesday promised jobs for graduates. He instructed the oil ministry and other government bodies to include a 50 per cent quota for local workers in subsequent contracts with foreign companies.

The United Nations on Wednesday expressed concern over the violence and urged calm.