Brussels willing to engage in talks but cautious about UK proposals 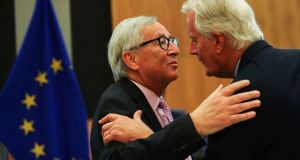 New proposals from the British government to replace the Northern Ireland backstop were welcomed by European Commission president Jean-Claude Juncker as a measure of Boris Johnson’s “determination to advance the talks ahead of the October European Council [summit] and make progress towards a deal”.

EU chief negotiator Michel Barnier told the commission on Wednesday that the proposals would be carefully studied and there was no question of rejecting them out of hand.

Diplomats cautioned that it was still unclear if the proposals were the basis of significant talks, but there was relief that Mr Johnson appeared to have pulled back in his letter to Mr Juncker from his “take it or leave it” stance of the last few days.

Although welcoming the UK’s willingness to commit to “to the full regulatory alignment for all goods and the control of goods entering Northern Ireland from Great Britain”, Mr Juncker expressed concern about cornerstones of the proposals, “problematic” elements of the package like governance and customs rules.

Diplomats from several member states expressed concern about the governance – “consent”– provisions, or what has been called the “Stormont lock”, to allow the Northern Ireland assembly to repeatedly vote on whether or not to continue to maintain the North’s regulatory alignment with Brussels.

A right to opt out would be tantamount to an escape clause, which could undermine the guarantees of the backstop to a permanent soft border, they say.

One diplomat said he did not believe the deeply porous customs enforcement rules would be acceptable in the member states as adequate protection for the single market.

Mr Juncker, who spoke directly to Mr Johnson on Wednesday afternoon, reiterated the commission demand for a “legally operational solution that meets all the objectives of the backstop: preventing a hard border, preserving North-South co-operation and the all-island economy, and protecting the EU’s single market and Ireland’s place in it.”

What chance a third UK extension?

But scepticism over the proposals has fuelled conviction in Brussels of the likelihood of no deal before the European Council summit on the 17th, and the likelihood that we are heading for a third UK extension.

How we get there, through the legal and political quagmire of the polarised Commons, is unclear.

It is understood that the UK government feels it has done enough to satisfy the DUP, although the proposals will mean regulatory checks on all goods, animals and food crossing from the rest of the UK into Northern Ireland.

The benefits of participating fully in the UK customs union could be seen as outweighing the inconveniences to east-west trade, one source suggested.

Asked if the proposals meant the UK also expected the EU to change its customs rules, a UK official replied: “We are asking them that because we agreed there will be flexible and creative solutions on the island of Ireland and part of it is adjusting legislation to enable it.“