Brussels has already rejected most of UK’s new Brexit plan 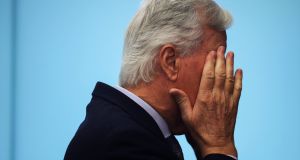 European Union chief Brexit negotiator Michel Barnier in Brussels on Wednesday. The EU has been insistent all along that there can be no question of agreeing to the withdrawal agreement in parts. Photograph: Francisco Seco/AP

Officials and diplomats in Brussels admitted to bewilderment at the idea that the British government could see its new formal negotiating offer as the basis of serious talks. The view, widely shared, was that what they were observing was little more than a cynical preparation for a domestic argument about who was responsible for the talks’ failure.

There was little if anything in the new UK proposals that had not already been discussed with and rejected by the EU Brexit task force.

Importantly, however, the UK’s draft agreement accepts the bulk of the withdrawal agreement (WA) negotiated by Theresa May and rejected by the House of Commons four times. It departs from the WA only on the backstop.

So, on the protection of citizens’ rights – EU citizens resident in the UK after Brexit and UK citizens resident in the EU27 – and on the formula for the British Brexit bill, put at about €50 billion, the agreement holds to the same commitments. As it does on the transition period, during which the UK will enjoy the rights of membership but not have a say.

But the EU has been insistent all along that there can be no question of agreeing to the WA in parts – widely known as “cherrypicking” – and so the Northern Ireland protocol and backstop remain indivisible from the whole.

It is worth noting, however, that the UK’s commitment to these non-backstop elements of the WA should make it easier to meet the EU requirement that, in the case of a no-deal Brexit, the UK will be expected to agree to the full withdrawal agreement before talks on a future relationship start.

The insistence by the UK on leaving the EU customs union, and the inevitability of the maintenance of customs controls on the island of Ireland, is the fundamental break made by the new proposals with the backstop provisions of the WA.

“We will allow the UK – entire and whole – to withdraw from the EU, with control of our own trade policy from the start,” Boris Johnson told the Tory party conference in Manchester on Wednesday.

Any soft border regime in Ireland, the EU insists, is predicated on the UK maintaining both regulatory alignment and customs union membership with the EU.

The new proposals go some way to creating a Northern Ireland economic zone separate from the rest of the UK by also including manufacturing goods as well as SPS (agri-food) in the all-island regulatory zone, but London draws the line at Northern Ireland leaving the customs union.

Instead it proposes customs controls, away from the border, but does not point to any successful model elsewhere of such an approach.

Brussels maintains the proposals are also a breach of the commitment by the UK to the Belfast Agreement “in all its aspects”. These include obligations to maintain cross-border co-operation and safeguarding the all-Ireland economy, both of which would be undermined by customs controls, whether on or close to the Border.

The UK is proposing a “Stormont lock”, giving local parties a say on any future proposals to keep the region aligned to EU rules if Britain decided to diverge from European standards on goods and food.

The idea of giving an all-Ireland body, let-alone the Northern Assembly, a say over the extent of regulatory alignment will simply not wash with Dublin or Brussels. SPS (animal-food) regulations are made in Brussels collectively by the member states, none of which have the right individually to determine which rules apply to them.

A refusal to accept a new regulation in the North would not block it there, any more than in the Republic, but simply would precipitate the collapse of a soft-border regime. The commission has insisted that what internal arrangements it makes for consulting regions are a matter for London.