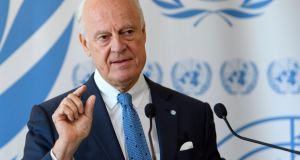 UN special envoy for Syria Staffan de Mistura: hopes progress can be achieved in talks between the Syrian government and militants in Geneva after ceasefires have been agreed in Kazakhstan. Photograph: Martial Trezzini/EPA

The Syrian army regained territory from Islamic State in central and eastern Syria on Wednesday as ceasefire talks got under way again in Kazakhstan. Delegations from the Syrian government, armed insurgents, Russia, Iran and Turkey gathered in Astana, Kazakhstan, to discuss the consolidation of ceasefire zones across the country.

UN mediator Staffan de Mistura, as well as Jordanian and US observers, are set to attend this, the sixth Astana round, which could be the most critical drive to obtain a country-wide ceasefire in the 6½-year conflict.

Once hostilities wind down, de Mistura hopes progress can be achieved in negotiations between government and opposition representatives in Geneva, where they are set to meet next month.

Since the fifth Astana round in early July, the Syrian government has extended its control over the country to 50 per cent of the territory, dramatically changing the situation on the ground and weakening Islamic State, al-Qaeda, and other armed opposition groups.

In response, de Mistura told the opposition it did not win the war and should focus on winning the peace. However, the opposition has failed to secure its chief demand: the ousting of Syrian president Bashar al-Assad.

While Damascus’ allies, Russia and the Iranian-backed militant group Hizbullah have claimed victory, de Mistura has warned there can be victory only if there is a sustainable, long-term political solution.

This is certain to leave the president in power, according to former US ambassador to Syria Robert Ford, who had encouraged protests in 2011 with the aim of bringing down Assad.

The main topic at the Astana talks, which recommence on Thursday, is strengthening three ceasefire or “deconfliction” zones and creating a fourth zone. The three existing zones cover the centre, the hinterland east of Damascus, and the south along the border with Jordan. The fourth would cover the northwestern province of Idlib.

Imposing a ceasefire there will involve an intensive political effort. Idlib is dominated by al-Qaeda’s Jabhat Fatah al-Sham militants but Islamic State and other jihadi fighters are also prevalent. Some 2.5 million people are estimated to live in the four zones.

Ahead of the latest Astana meeting, Moscow and Riyadh agreed that the deconfliction plan is an important step forward during a meeting between their foreign ministers Sergei Lavrov and Adel al-Jubeir respectively. The Saudis also expressed support for Russia’s efforts to resolve the conflict through the Geneva talks.

Saudi backing is essential since Riyadh has armed and financed groups fighting the government and sponsors the opposition Syrian High Negotiations Committee (HNC). It has refused to accept the opposition’s defeat in the war and to merge with two other opposition groups which accept that Assad will stay on.

By sticking to its hard line, the HNC and its Saudi sponsor could be sidelined once talks convene in Geneva. This would not suit Riyadh, which seeks a role in negotiations.

Ceasefires do not cover the Islamic State terro group, also known as Isis, and the areas it holds. Consequently, the US-backed Kurdish offensive against Islamic State in its de facto capital, Raqqa, has continued while the Syrian army, supported by Shia militias and Russian air strikes, has ended the Islamic State siege of Deir al-Zor city and military bases and is mopping up pockets of territory held by the group in Homs province.