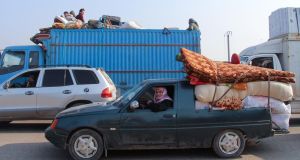 Syrians flee Maaret al-Numan northwards on Sunday after an uptick in violence in the south of the northwestern Idlib province. Photograph: Ibrahim Yasouf/AFP via Getty Images

The Syrian army, backed by Russian air power, has advanced into al-Qaeda-controlled north-western Idlib province over the past week with the aim of capturing the town of Ma’arat al-Nu’man, which straddles the highway linking Damascus with Hama and Aleppo.

Syrian and Russian combat aircraft have also bombed insurgents on the edge of Idlib, forcing them to retreat into the hinterland of the province. Turkish media report 25,000 civilians have fled Ma’arat al-Nu’man and surrounding villages and are making for the Turkish border.

This is the first major offensive since August when pro-government forces regained a wide swath of territory in Hama and Idlib provinces in a phased campaign to rout al-Qaeda-linked Hayat Tahrir al-Sham and its allies and retake Syria’s last opposition-held province where up to 30,000 insurgents dwell among between 2½ and three million civilians, half of them refugees.

The Syrian army says it has seized more than 20 villages and strategic hilltops and is approaching one of the dozen fortified Turkish army bases constructed under an agreement with Russia to monitor a ceasefire and avert a full-scale Syrian army offensive.

While the objective of the current operation is to reopen a section of the highway connecting Syria’s main cities, the government’s ultimate goal is to retake all Syrian territory lost to rebel and jihadi groups. Moscow and Iran have declared support for Damascus in the nationwide campaign.

The fighting in Idlib coincided with co-ordinated Islamic State rocket attacks on Syria’s main oil refinery at Homs and natural gas installations. The strikes demonstrated that Islamic State fugitives have regrouped and reorganised and intend to reopen their battle against the secular Syrian government, its partners and the US-led coalition.

Meanwhile, Russia and China have vetoed a United Nations Security Council resolution providing for the delivery without Syrian government approval of humanitarian aid at four border crossings with Turkey, Jordan and Iraq. The resolution, circulated by Belgium, Germany and Kuwait, called for a year-long mandate for cross-border transfers of aid into Idlib and northeastern Syria. Russia insists that deliveries should take place only at two Turkish crossings for six months. Ending transfers from Iraq, in particular, could undermine the autonomy of US-backed Kurdish forces and compel the Kurds to make a deal with Damascus to receive essential external assistance.

Russia’s veto appears to be in retaliation for the deployment of US forces in eastern Syria at the country’s main oil fields to deny both Islamic State fighters and the government access to the oil. In October US president Donald Trump ordered the remaining 1,000 US soldiers to withdraw from northern Syria – leaving Washington’s Kurdish allies exposed to Turkish attack – but subsequently dispatched at least 600 troops to the oilfields.