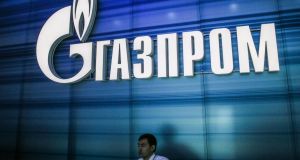 Russia has reached a high-stakes gas deal with Ukraine but its construction of a major new pipeline to Germany has been abruptly halted due to US sanctions, causing anger in Moscow and Berlin.

Amid renewed but fragile efforts to end their five-year conflict, Russia announced on Saturday that it had agreed to continue pumping gas across Ukraine to European Union states when their current transit contract ends this month.

The new deal will see Kremlin-controlled energy giant Gazprom send 65 billion cubic metres of gas via Ukraine in 2020 and 40 bcm annually from 2021-24, easing concerns of supply disruption this winter or in subsequent years.

Ukraine hailed a hard-won agreement that secures billions of euro in transit fees for its struggling economy and obliges Russia pay $2.9 billion (€2.6 billion) to Kiev this month in line with a ruling from an international arbitration court; other energy disputes that the neighbours are litigating will be cancelled as part of the deal.

European Commission vice-president Maros Sefcovic said “everyone is a winner” after the three-way energy talks between Russia, Ukraine and the EU.

“Long-term security of supply to European households was my number one priority and we have sent a powerful message that the EU is guaranteeing warm homes, stable markets and competitive prices.”

Russia supplies about one-third of the EU’s gas and about half of that now arrives via Ukraine, but Kiev and a host of member states fear that completion of the new Nord Stream 2 pipeline linking Russia to Germany under the Baltic Sea could allow Moscow to turn off the tap for much of central Europe.

The US is a fierce critic of the project and President Donald Trump signed sanctions into law last Friday to punish firms that help build the 1,200km Gazprom-owned pipeline, which is about 300km short of completion.

Allseas, the Swiss-Dutch company whose ships are laying the pipeline, announced on Saturday that it was winding down work on the project in response to the threat of US punishment.

It is not clear which firm could continue the highly specialised work of laying the undersea pipeline, or whether plans to finish construction early next year must now be revised, but Russia and Nord Stream 2 insisted the project would be completed.

“We will respond to these sanctions, but in such a way that we do not damage ourselves. And of course we will take this into account as we formulate all our relations,” Russian foreign minister Sergei Lavrov said on Sunday.

“I am sure that Nord Stream 2, just like TurkStream, will happen. TurkStream will be launched in literally two or three weeks,” he added of another Gazprom project to pump Russian gas across the Black Sea to Turkey and then through the Balkans to central Europe.

Officials in Berlin also denounced the sanctions, and have suggested that the US is seeking to reduce EU-Russia energy co-operation in the hope of boosting its own fuel sales to Europe.

German finance minister Olaf Scholz rejected the US measures as “serious interference in the internal affairs of Germany and Europe and their sovereignty.”