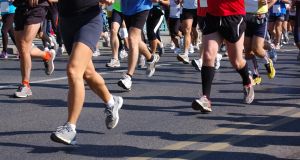 A participant in a race in Georgia has been accused of smacking a reporter covering the event on the rear. File photograph: Getty Images

Alex Bozarjian, a reporter for WSAV-TV in Savannah, Georgia, was laughing and smiling as she updated viewers on the latest at the 2019 Enmarket Savannah Bridge Run on December 7th.

Runners darted by, making silly faces and waving their hands to the camera during her live broadcast. Suddenly, Ms Bozarjian’s expression changed from one of joy to disbelief. A passing runner appeared to have slapped her on the rear. She looked shocked and upset as she tried to compose herself on camera. Mouth agape, she was speechless for about three seconds.

Bozarjian (23), a multimedia journalist at the station, posted a video clip of the episode on Twitter, where it drew outrage. “To the man who smacked my butt on live TV this morning: You violated, objectified, and embarrassed me,” she wrote. “No woman should EVER have to put up with this at work or anywhere!”

Mr Callaway spoke to WSAV and apologised, saying he regretted what he had done. “It was an awful act and an awful mistake,” he told the station. “I make mistakes, I’m not perfect, and I’m asking for forgiveness and to accept my apology.”

“This conduct displayed toward Alex Bozarjian during her live coverage of Saturday’s Savannah Bridge Run was reprehensible and completely unacceptable,” the statement, issued on Friday, said. “WSAV continues to support Alex completely as this case moves forward.” – New York Times