Stephen Hawking pulls out of major presidential conference in Jerusalem 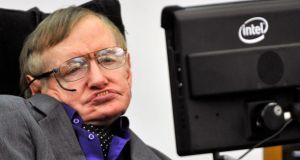 Prof Stephen Hawking: his spokesman Tim Holt said the decision not to attend the conference was based strictly on health concerns. Photograph: Nick Ansell/PA Wire


In a major victory for the Israel boycott movement, British theoretical physicist Prof Stephen Hawking has pulled out of next month’s prestigious presidential conference in Jerusalem.

Wheelchair-bound Hawking (71), who had agreed to headline the conference, Facing Tomorrow , alongside other major international personalities, informed Israeli president Shimon Peres of his decision last week. Pro-Palestinian groups said he took the decision to respect the boycott “based upon his knowledge of Palestine, and on the unanimous advice of his own academic contacts there”.

However, Cambridge university spokesman Tim Holt said Prof Hawking’s decision was based strictly on health concerns. “For health reasons, his doctors said he should not be flying at the moment so he’s decided not to attend.”


Israel displeased
Either way, Israel is not pleased. “This is an outrageous and wrong decision,” said Yisrael Maimon, the chairman of conference’s steering committee.

“The academic boycott of Israel is outrageous, especially by someone who preaches freedom of thought. Israel is a democracy, where anyone can state his case, whatever it may be. Imposing a boycott goes against the principles of holding an open and democratic discourse.”

Next month’s event, the fifth annual presidential conference sponsored by Mr Peres, is also a platform to celebrate the Israeli president’s 90th birthday.


Personalities in protest
Hawking, who has visited Israel four times, was inundated with messages from pro-boycott activists after accepting the invitation. He joins a list of British personalities who have turned down invitations to visit Israel, including Elvis Costello, Roger Waters, Brian Eno, Annie Lennox and Mike Leigh.

The Boycott, Divestment and Sanctions campaign against Israel pushes for a complete cultural and academic boycott until a final peace settlement is reached with the Palestinians.

“Hawking’s decision to join the boycott of Israel is quite hypocritical for an individual who prides himself on his own intellectual accomplishment. His whole computer-based communication system runs on a chip designed by Israel’s Intel team. I suggest that if he truly wants to pull out of Israel he should also pull out his Intel Core i7 from his tablet.”