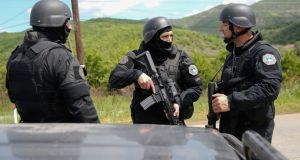 Members of a Kosovo special police unit near the village of Cabra, northwestern Kosovo, during police raids. The operation against “organised crime” has sparked tensions with Serbia. Photograph: AP Photo/Visar Kryeziu

Serbia put its military on full alert on Tuesday after an armed police operation in neighbouring Kosovo led to the detention of about 30 people, including 19 police officers and a Russian employee of the United Nations.

The leaders of mostly ethnic Albanian Kosovo, which declared independence from Belgrade in 2008, said people suspected of links to smuggling and organised crime were the target of dawn raids in northern towns where Serbs form a majority.

Kosovo officials said two members of the country’s special police units were shot and wounded during the operation, and three others were hurt in clashes at makeshift barricades built by local Serbs to hamper the raids. Several civilians were also injured.

EU-brokered talks between Kosovo and Serbia have failed to deliver a deal to normalise their relations, and tension has simmered since the government in Pristina imposed a 100 per cent tariff on Serbian imports last November.

“Serbia will try to preserve peace and stability, but will be fully ready to protect our people at the shortest notice,” Serbian president Aleksandar Vucic said after putting the army on alert, as he has in response to previous incidents in Kosovo. “I guarantee you that if an escalation of the conflict occurs, if an attack against the Serbian people occurs, Serbia will win.”

Serbian media said a column of army vehicles from a base in the southern city of Kraljevo set off in the direction of the frontier with Kosovo, and a Serbian fighter jet was spotted flying low near the border area.

EU spokeswoman Maja Kocijancic said Brussels wanted the Balkan neighbours to show the “utmost restraint”, and added that police operations in Kosovo should “reinforce and not weaken the normalisation efforts” with Serbia.

Kosovo’s president Hashim Thaci and prime minister Ramush Haradinaj insisted the raids were not aimed at any ethnic group. Both men were separatist field commanders during a 1998-9 war between Kosovar rebels and Serbian troops.

“Strengthening rule of law is our country’s and region’s core interest. Organised crime and smuggling are a direct threat to our mutual progress...The government of Serbia should not undermine our efforts to tackle it,” Mr Haradinaj wrote on Twitter.

“I confirm that this operation is against organised crime, and it also targets police and customs officers. I call citizens to remain calm,” he added.

Mr Thaci said that the people detained included “Albanians, Serbs, Bosnians and also a Russian who was camouflaged under the guise of a diplomat to hamper the police operation”.

The Russian citizen was identified as Mikhail Krasnoshchekov, a member of the United Nations mission in Kosovo. He was released in the afternoon after a protest from Russia, which is Serbia’s main ally and a staunch opponent of Kosovo’s independence, as well as a rival in the Balkans to other powers including the EU, Nato, China and Turkey.

“Kosovo and regional countries are familiar with the Russian agenda to destabilise our region,” Mr Haradinaj said.

Russia’s foreign ministry called the raids a “provocation...intended to scare and pressurise the non-Albanian population” of Kosovo.