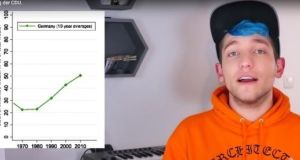 A clip from Rezo’s “The Destruction of the CDU” – an energetic, 55-minute slice-and-dice of 14 years of what he terms CDU’s “gross incompetence” in power. Screengrab: YouTube

Chancellor Angela Merkel sparked snorts of derision for suggesting, in 2013, that “the internet is new terrain for all of us”.

But nothing like the snorts directed at her successor as leader of Germany’s ruling Christian Democratic Union (CDU).

After her party’s disastrous Sunday’s disastrous CDU European election result, its worst-ever result in a nationwide election, Annegret Kramp-Karrenbauer appeared to shift part of the blame on to a video by “Rezo”, a 27-year-old YouTuber with blue hair.

“The Destruction of the CDU”, is an energetic, 55-minute slice-and-dice of 14 years of what he terms CDU’s “gross incompetence” in power: on climate change, security, intellectual property rights and drugs policy that are “destroying our lives and our future”.

One week and 12.7 million views later, support doubled for the Greens and slumped in the European election for the CDU. That party was never the first choice of young German voters but Kramp-Karrenbauer said the YouTube intervention raised questions about “whether analogue rules apply to the digital sphere, yes or no?”

“What would be up in this country if, let’s say, 70 newspapers had said, ‘Let’s have a joint appeal: please don’t vote for the CDU . . ?’” she asked. “That would have been a clear influencing of opinion before the election.”

German newspapers don’t make political party endorsements, out of tradition rather than legal impediment, though many have a clear editorial line favouring a spot on the political spectrum.

Days after Germany marked 70 years of the Basic Law, its postwar constitution, even teenage bloggers are up in arms against the CDU leader, citing article five’s guarantee of the universal right “to express and disseminate one’s opinion in word, text and image”.

Her political rivals have accused her of being a bad loser, and a senior Greens politician expressed hope “it’s just an expression of helplessness” towards politics in the digital age.

With jump cuts, high-speed rhetoric and a flood of charts and statistics, Rezo’s video is a blistering broadside against Germany’s dominant, self-described Europe party: “You say that young people should be political, then you have to handle it when they think your politics are shit.”

The CDU leader’s first response to the video was sarcasm: “I asked myself why we weren’t for that matter responsible for the seven plagues in ancient Egypt. ”

After her initial intervention struck a dud note, CDU digital producers spent a day working on and filming a reply video fronted by its youngest MP, also aged 27. But it was canned, with the rattled CDU afraid it couldn’t win on Rezo’s home turf, the “new terrain” of the internet. Instead the party invited the vlogger for a face-to-face conversation, an invitation he may not refuse after the CDU leader’s post-election intervention.

As things spiralled out of control online, Kramp-Karrenbauer went online to dismiss as “absurd” claims that she was trying to strangle free discussion, a crucial part of democracy.

“What we have to talk about are rules that apply in elections,” she wrote on Twitter.

That triggered a fresh wave of sarcastic responses. News channel N-TV argued the video by Rezo, a vegan musician and son of two Lutheran pastors living in the southwestern city of Aachen, was “unfair and defames . . . but is completely free, permissible democratic opinion-shaping”. Through her response the CDU politician, meanwhile, looked like an “amateur province politician”.

None of this would have happened to Angela Merkel: five years after discovering the “new terrain” of the internet, the chancellor still has no social media accounts.