Under eugenics law about 16,000 people were sterilised to prevent birth of ‘inferior’ children 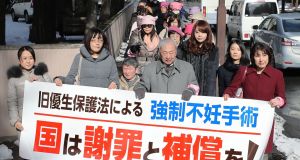 A court in Japan has rejected demands for damages from two women who were forcibly sterilised four decades ago under a now-defunct eugenics law designed to prevent the birth of “inferior” children.

The women, who are in their 60s and 70s, had sought a total of 71.5 million yen (€580,000) from the government, describing their ordeals as a violation of their human rights. The older woman said Tuesday’s ruling had left her “speechless”.

The court in Sendai, northeast Japan, ruled that the 1948 eugenics law, which wasn’t abolished until 1996, was unconstitutional, but said the 20-year statute of limitations for compensation claims under Japan’s civil code had expired.

The ruling was the first in about 20 damages suits that have been brought by victims of forced sterilisation across Japan.

One of the two plaintiffs, who have not been named, said last year that she had been forcibly sterilised in her mid-teens because she was suspected of having an intellectual disability.

“I was given anaesthetic and I didn’t remember anything after that,” she said. “When I woke up, I was in a bed and I saw a sink. I wanted to have some water but I was told I wasn’t allowed to drink.”

About 16,500 people, mostly women with disabilities, were targeted between 1948 and 1996 under the law, which aimed to “prevent the birth of poor-quality descendants – and to protect the life and health of the mother”.

About 8,000 other people gave their consent – most likely under pressure - while almost 60,000 women had abortions because of hereditary illnesses, according to media reports. The last forced sterilisation was carried out in 1993.

Germany and Sweden had similar measures, but have since apologised to victims and provided compensation.

Last month, Japan’s government apologised and awarded compensation to thousands of victims. Each surviving victim will receive 3.2m yen (€26,000) to compensate for their suffering, as well as an apology from the state “for the great physical and mental suffering caused by the forced sterilisation programme”.

All survivors are eligible for the sum, including those who reportedly agreed to undergo surgery.

But lawyers for the women in the Sendai case said the one-off compensation offered by the government was insufficient. “It is understandable that lawmakers have been hurrying to enact the law to pay one-off compensation to ageing victims,” they said in a statement last month.

The legal actions brought by victims has highlighted the Japanese state’s mistreatment of people with disabilities and chronic conditions in the decades after the second World War.

Under a segregation law that was repealed in 1996, it forced leprosy patients to live in sanatoriums located in mountains or on remote islands. Many were sterilised or made to have abortions. – Guardian