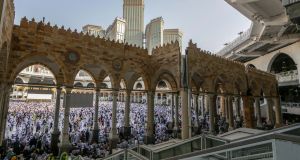 Muslim pilgrims gather inside the Sacred Mosque, in Mecca, last year. This year’s hajj will not be cancelled, but only ‘very limited numbers’ of people will be allowed to perform the major Muslim pilgrimage. Photograph: EPA

Muslims the world over have expressed sadness and disappointment at the Saudi decision to bar foreign pilgrims from performing the hajj this summer. The number of Saudi citizens and residents taking part in the pilgrimage is to be severely curbed.

Citing the need to ensure crowd control and social distancing to contain the spread of coronavirus, hajj minister Mohammad Benten said the number of participants “may be in the thousands”.

“We are in the process of reviewing, so it could be 1,000 or less, or a little more.” At least 2.5 million Muslims normally attend the pilgrimage, of whom about three-quarters come from abroad.

“This is a very sensitive operation and we are working with experts in the health ministry,” the minister said. Only people below the age of 65 will be permitted to take part and attendees will be quarantined before and after the five-day pilgrimage.

While Saudi citizens and residents may be inconvenienced by the limit on the number allowed to attend, they can easily participate in future. For Muslims from the global community who planned to perform this hajj, the ban is a painful blow because securing a hajj visa is difficult as each country is allocated a quota based on its Muslim population.

Many would-be pilgrims have scraped and saved for years and waited patiently for precious visas for the “sacred journey” to Mecca, Mount Arafat, and Medina. The pilgrimage is one of the five pillars of Islam and an obligation for healthy Muslims who can afford to go. The hajj is regarded as the high point in a devout Muslim’s life as it provides a new beginning with a clean slate.

Elderly people may not have another chance. Many are prepared to brave the pandemic as they regard death during the hajj a blessing.

Although disease and warfare have previously caused the cancellation of the hajj, this has not happened since the establishment of Saudi Arabia in 1932. This year’s pilgrimage can be seen as a token event designed to reassert the legitimacy of Saudi guardianship of Islam’s holy places.

This is contested by some Muslims who argue founder of the dynasty, Abdel Aziz Ibn Saud, supplanted the Hashimite clan that ruled Mecca for seven centuries.

The Saudi aim is to ensure the hajj does not provide an opportunity for coronavirus to spread at home and abroad. The kingdom has had more than 167,000 confirmed cases of Covid-19 and nearly 1,400 deaths.

Since the end of February Saudi Arabia has banned entry to foreigners, closed the holy cities of Mecca and Medina, and imposed curfews and lockdown. Restrictions were eased last weekend.

The curtailment of the hajj will deprive Saudi Arabia of an estimated $6 billion (€5.3 billion) in revenue at a time when the kingdom is suffering from falling oil prices and an economic downturn created by the pandemic.