President Vladimir Putin has rallied Russian national pride during a huge military parade to mark 75 years since the defeat of Nazi Germany, ahead of a vote on constitutional changes that would allow him to rule until 2036. Video: Reuters 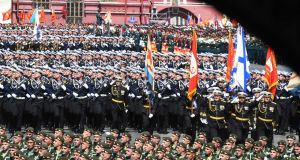 Russian servicemen marching on Red Square during a military parade to mark the 75th anniversary of the defeat of Nazi Germany. Photograph: Ilya Pitalev/Host photo agency/AFP via Getty Images

President Vladimir Putin has rallied Russian national pride during a huge military parade to mark 75 years since the defeat of Nazi Germany, ahead of a vote on constitutional changes that would allow him to rule until 2036.

Tens of thousands of troops took part in parades across Russia that were postponed in May due to the coronavirus outbreak, which has now infected 606,881 people in the country after 7,176 new cases were confirmed on Wednesday.

Some 14,000 soldiers marched through Red Square in Moscow, followed by a procession of almost 300 military vehicles, including Russia’s latest tanks and nuclear missile launchers, and a flypast of 75 bombers, fighter jets and helicopters.

Critics said the events jeopardised public safety and were held to whip up patriot fervour before a week of voting on amendments to the constitution, which will run from Thursday to July 1st after being rescheduled from April.

The most eye-catching change would “reset” the term limits for Mr Putin – who has already led Russia for 20 years as president and prime minister – and permit him to run for two more six-year terms when his current mandate expires in 2024.

“We will always remember that Nazism was crushed by the Soviet people,” Mr Putin (67) said on Red Square. “It is impossible to even imagine what would have happened to the world had it not been for the Red Army that stood up to defend it.”

“Remember that the Soviet people shouldered the main burden of the fight against Nazism . . . It was our people who defeated [that] terrible, total evil,” he added.

“This is the main truth about the war, honest and clear. We must protect and defend it, and pass it on to our children, grandchildren and great-grandchildren.”

Mr Putin, a former KGB officer, has sought to bolster his compatriots’ pride in the Soviet Union’s achievements – especially its role in defeating Nazi Germany – while largely glossing over the mass murder, deportations and repression carried out by its security services.

He has also invested heavily in modernising Russia’s military, allowing the Kremlin to project power into the Middle East to prop up its ally Bashar al-Assad in Syria, and to fight wars with former allies Georgia and Ukraine and annex Crimea from the latter.

Russia’s aggression against Ukraine – where more than 14,000 people have been killed in five years of fighting – and its deployment of hackers and assassins against targets abroad have poisoned relations with the West. That tension, coupled with coronavirus concerns, meant that only a handful of foreign leaders joined Mr Putin on Red Square.

The president of Kyrgyzstan, Sooronbai Jeenbekov, pulled out of the event at the last minute after two members of his delegation in Moscow tested positive for the virus.