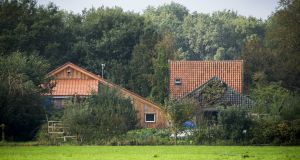 A farmhouse near the village of Ruinerwold in the Netherlands where polkice this week found a 58-year-old man and a group of young adults between 18 and 25 who had been living for years without contact with the outside world. Photograph: Vincent Jannink/EPA

Dutch police said on Thursday they had arrested a second man on suspicion of “unlawful deprivation of liberty” in the case of a family that had lived in apparent seclusion on a farm for years.

The first suspect was charged earlier on Thursday with unlawful detention and harming others’ health, and will remain in detention for at least two more weeks, prosecutors said.

He is 58-years-old and the formal renter of the property in Ruinerwold village in the northern province of Drenthe, said police, who did not release the names of either man because of privacy laws.

“Today we arrested a second suspect in the Ruinerwold investigation,” Drenthe police said in a statement.

“The arrested person, a 67-year-old man from Ruinerwold, is one of the six persons discovered this Monday in the house located at Buitenhuizenweg,” the statement said, referring to the name of the road on which the farm is located.

Police have said they acted on a tip and found five siblings, estimated to be between 18- and 25-years-old, on the farm, along with a man they identified as their ailing father. Police said the group may have lived in isolation for nine years.

The 58-year-old man has been remanded in custody for two weeks charged with detaining members of a family against their will at a remote farmhouse in the north-east of the Netherlands, and with endangering their health.

The man was remanded as police and social workers struggle to establish the story behind the seven people who all appear to have been living together – possibly in hiding or some of them perhaps as captives – in the boarded-up farmhouse near the village of Ruinerwold in the rural province of Drenthe.

The mystery began to unfold at the weekend when a young man, dishevelled and with long dirty hair, walked into a local bar and told his story to the barman, saying he had been hidden at the farmhouse for the previous nine years along with his five brothers and sisters.

Police entered the house on Tuesday and found the 58-year-old man and the group of young adults. They were taken by ambulance to temporary accommodation nearby, where they had medical check-ups.

The 25-year-old who raised the alarm was taken to a separate location.

The older man, named locally as “Josef B”, appears to have had a stroke in recent years and was confined to bed when he was discovered. It’s thought he may be an Austrian national.

Police initially said they were uncertain about the relationship between the 58-year-old and the others, but the mayor of Ruinerwold, Roger de Groot, said the detained man was emphatically “not the father of the family”.

It is now believed the children’s mother may have died nine years ago before they moved to the farm.

None of the seven was registered with the local municipality, which is a legal requirement in the Netherlands, and it’s believed none of the young adults has ever been to school.

The 58-year-old man was detained by police on Tuesday for refusing to co-operate with their investigation.

Part of that investigation has focused on two buildings in the village of Zwarthuis, roughly a 15-minute drive from Ruinerwold.

One appears to have been a workshop selling wooden craft items, including toys, which were made by members of the family before their move to the Ruinerwold farm.

Locals said a note had been posted on the door in 2006 saying it had been closed “due to illness”, perhaps the illness of the mother.

The story has gripped the Netherlands and given rise to a flurry of speculation. However, the truth may be stranger than fiction.

One line of inquiry being pursued on Thursday was that “Josef B” met the group of siblings and their mother through the Unification Church, popularly known as “The Moonies”, founded by South Korean pastor, Sun Myung Moon, who died in 2012.

It’s thought this may have given rise to talk among local people that the group was some form of cult “waiting for the end of time”. – Additional reporting Reuters